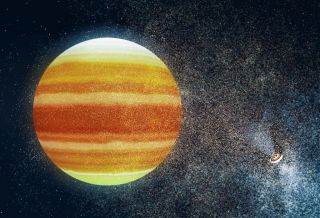 Artistic impression of a habitable planet (center) near a pulsar (right). Such a planet must have an enormous atmosphere that converts the deadly X-rays and high-energy particles of the pulsar into heat.
(Image: © Institute of Astronomy, University of Cambridge)

Although pulsars regularly blast out deadly gamma rays and X-rays, alien planets in orbit around them could theoretically be habitable, a new study finds.

However, these pulsar worlds are likely not friendly to humans — according to the study, the planets' environment would be more like the bottom of the sea on Earth.

When a large star explodes in a supernova at the end of its life, it can leave behind a dense core of matter called a neutron star. Neutron star matter is the densest known material — a sugar cube-size piece has the mass of a mountain, about 100 million tons. The mass of a single neutron star exceeds that of the sun while fitting into a ball smaller in diameter than London. [Inside a Neutron Star (Infographic)]

Pulsars rotate extraordinarily rapidly, up to thousands of revolutions per second, and they flash like lighthouse beacons — hence their name, which is short for "pulsating star." They regularly blaze with gamma rays and X-rays and spew out energetic particles. According to the new study's researchers, the Milky Way galaxy hosts about 1 billion neutron stars, about 200,000 of which are pulsars.

Despite the violent nature of pulsars, they can still have planets. In fact, the first exoplanets that astronomers discovered orbit the pulsar B1257+12, located about 2,300 light-years away from Earth in the constellation Virgo.

Three worlds are known to orbit B1257+12, one of which is about one-fiftieth Earth's mass, while the other two are "super-Earths" about four times Earth's mass. Since these three exoplanets were discovered in 1992, astronomers have also discovered one Jupiter-size world around the pulsar PSR J1719–1438 and another Jupiter-size world around PSR B1620-26, which is a binary system containing a pulsar and a white dwarf star.

Now researchers suggest that life could exist on those pulsar-orbiting planets. "Despite emitting deadly particles and radiation, pulsars might have an habitable zone," study co-author Alessandro Patruno, an astrophysicist at Leiden University in the Netherlands, told Space.com.

Since there is life virtually wherever there is water on Earth, astronomers often judge a world as potentially habitable if it exists in a zone where liquid water could survive on its surface. In the new study, researchers found "habitable zones" could exist around neutron stars.

"Such a habitable zone can be as wide as the one that exists around normal stars," study co-author Mihkel Kama, an astrophysicist at the University of Cambridge in England, told Space.com.

The scientists used the Chandra Space Observatory to analyze X-rays from the pulsar B1257+12. Their calculations suggest this pulsar's two super-Earths might be warm enough to have liquid water on their surfaces, Patruno said. [The X-Ray Universe: Chandra X-Ray Space Observatory Pictures]

The researchers noted the habitability of planets around pulsars depended on at least two key findings. For one, atmospheres a million times thicker than Earth's are likely needed to protect any life on their surfaces from pulsar radiation. This would make conditions on these worlds similar to ones found in Earth's deep seas.

"The atmospheric pressure you find on the surface of these planets is comparable to or even higher than the pressure you have in the Mariana Trench," which at 36,000 feet deep (11,000 meters) is the deepest known point on Earth's surface, Kama said.

"However, since we know that life exists in the depths of our ocean, some form of life might certainly exist in these high pressure and warm environments," Patruno said.

Another key finding was that habitable worlds around pulsars are likely super-Earths with masses up to 10 times that of Earth, whose stronger gravitational fields help them hold onto their atmospheres for a billion or so years, the researchers said. The scientists calculated that radiation from pulsars would obliterate the atmosphere of a smaller planet within a few thousand years, leading any liquid water on their surfaces to boil away.

The researchers started this work "expecting to find that it is impossible to have an habitable zone around pulsars," Kama said. "Instead we quickly realized that for super-Earths this is a very solid possibility. Add on top of that the fact that the only multi-planetary pulsar system known has two super-Earths and our excitement skyrocketed."

For worlds in the habitable zones of pulsars, "the high energy particles and radiation will keep the atmosphere warm enough to allow liquid warm water to exist," Patruno said. "Since there is hardly any visible light reaching the planet — pulsars emit almost no visible light — this opens up very unexpected scenarios for exotic habitable environments."

The scientists do note that even a thick atmosphere cannot block all of the high-energy radiation from pulsars. "Some of it might still reach the surface of the planet, which might then be detrimental for any form of life," Kama said.

Patruno and Kama detailed their findings online Dec. 19 in the journal Astronomy & Astrophysics.