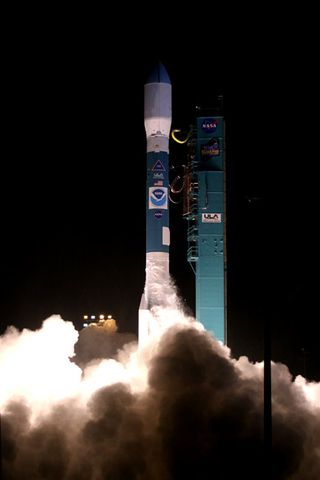 The Delta 2 rocket lofts the NOAA-N Prime spacecraft into the night sky over Vandenberg Air Force Base in California on Feb. 6, 2009.
(Image: © NASA/Carleton Bailie, ULA)

Alast-of-its-kind weather observatory with roots reaching back to the earliestdays of U.S. space exploration rocketed into orbit this morning to keep loggingenvironmental records until a long-delayed new generation of satellites isready.

The satellite's family treecan be traced to 1960 and the launch of TIROS, the first Television InfraredObservation Satellite. Upgrades and technology advancements have evolved thecivilian weather observatories through the decades. NOAA-NPrime is 43rd satellite launched in the long line and the 16th from itsparticular series that dates to 1978.

NOAA-N Prime has a designlife of two years. Its sister-satellites have had an average lifespan of 3.75years, and officials hope to get as much use out of this spacecraft aspossible.

"NOAA-N Prime is goingto give us data the same as we've been getting in the past, but its main roleis continuity of service and to restore some of the degraded instruments thatwe've had," said Tom Wrublewski, the satellite's acquisition manager."So we're looking forward to a fresh satellite that has 100 percent ofeverything working and also help us continue our services until the nextgeneration NPOESS satellites are ready."

NPOESS is the future ofpolar weather satellites. The National Polar-orbiting Operational EnvironmentalSatellite System will combine the civilian NOAA and U.S. military weatherspacecraft into a single program, an effort started by the ClintonAdministration in 1994.

But the new NPOESS satelliteshave been beset by technical and money problems, delaying the first craft'slaunch to January 2013.

To help bridge the gap fromthe heritage satellites to the next generation, a demonstration satellitecalled the NPOESS Preparatory Project is slated for deployment at the end of2010.

"The NPP satellite,which carries the instruments that the NPOESS satellite is carrying, will giveus the insurance of having a backup in orbit if for some reason N Prime failsbefore the launch and checkout of (the first NPOESS)," said Gary Davis,director of the Office of Systems Development at NOAA's Satellite andInformation Service.

Circling 530 statute milesabove Earth and completing a revolution every 100 minutes, the NOAA-N Primewill operate in the so-called "afternoon" polar orbit to replaceNOAA-18 and its degraded instruments. The orbit crosses the equator from southto north at 2 p.m. local time on each trip around the planet.

A joint endeavor betweenNOAA and Europe's weather satellite agency has the "morning" orbitcovered. The first MetOp satellite in that collaborativeproject launched in 2006.

"It's a goodcooperation," Mignogno said. "We share the data and we both benefitfrom the fact that we're each providing only one satellite but getting thebenefit of two."

Users of data from thepolar-orbiting satellites are wide ranging. Meteorologists generate weatherpredictions, agricultural scientists need the information for droughtmanagement and monitoring vegetation and soil moisture and even the aviationcommunity rely on the spacecraft to detect and track volcanic ash plumes forre-routing of aircraft.

NOAA-N Prime is outfittedwith instruments that provide imagery, atmospheric temperature and humidityprofiles, and land and ocean surface temperature observations, all of which arekey ingredients for weather forecasting. In addition, the information generatesdecades-long databases for climate monitoring and global change studies.

"The data frompolar-orbiting satellites such as NOAA-N Prime will be vital to our mission aswe move forward to monitor and to predict not only current conditions in theatmosphere and oceans but also to keep tabs on the longer term climatetrends," said Wayne Higgins, director, NOAA's Climate Prediction Center.

The Lockheed Martin-builtsatellite also carries an instrument to study the quantity and extent of ozonein the atmosphere and a space environment monitor that measures changes in theEarth's magnetic field and radiation belts caused by solar storms that canthreaten astronauts and impact terrestrial communications, according to WayneMcIntyre, NASA's program manager for the Polar Operational EnvironmentalSatellites.

In addition, the NOAAsatellites are equipped with search and rescue packages that detect distresssignals from emergency beacons. Over the past 26 years, the network has beencredited with more than 24,000 rescues worldwide.

NOAA-N Prime had toovercome the perils of its past to even reach space. In September 2003, the spacecraftwas severely damaged in a factory accident, falling on its side while being moved becauseworkers failed to realize the satellite wasn't bolted to the handling cart.Extensive work went into rebuilding the craft.

Shipped to Vandenberg lastNovember, the bird passed its final pre-flight testing and then rode to thelaunch pad in mid-January for mounting atop the Delta rocket.

Twoback-to-back scrubs for pad-related glitches kept NOAA-N Prime on theground a couple extra days this week, but the wait resulted in today's flawlessascent to orbit.

"The flight was justawesome. We hit the orbit right on the money. The apogee, perigee andinclination of the spacecraft looks right where we wanted it," NASA launchmanager Omar Baez said.

This marked the 85thconsecutive successful launch by a Delta 2 rocket and the 138th overall for thevenerable booster that will celebrate its 20th birthday next week.

"We are proud tocelebrate the 20th anniversary of Delta 2 by successfully launching thiscritically important spacecraft for both NASA and NOAA and we congratulate ourmission partners on their success," said Jim Sponnick, United LaunchAlliance's vice president of the Delta Product Line.

After arriving in space,the satellite sprung to life and unfurled its power-producing solar array. Twomonths of testing are planned before the craft goes to work as the finalweather satellite in the long family history.

"A bunch of peoplethat worked on this program for the full 30 years are all going to get togethera couple weeks after the successful launch of N Prime and just reminisce aboutan era that's come to an end," Davis said.

"I think this is avery storied program," Mignogno said. "I think it's going to be atough act to follow."