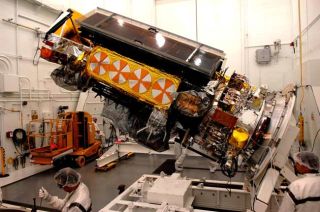 A half-billion dollarclimate observatory, having weathered the storied perils of its past, isfinally poised for launch early Wednesday.

Live reports on Wednesday'sascent will be posted in our Mission Status Center.

The launch, the culminationof years of hard work for most missions, will carry a special distinction forNOAA-N Prime.

On a September day fiveyears ago, officials received news that the satellite wasdamaged at its factory.

"It was a Saturday andI was sitting at home when I got a phone call from my program manager," saidGary Davis, director of the Office of Systems Development at NOAA's Satelliteand Information Service.

Minds began contemplatingevery scenario as images of the smashed satellite spread across the Internet.

"The picture was veryscary," Davis said.

The spacecraft was beingtitled from vertical to horizontal position when it slipped from a"turnover cart" and crashed to the floor of a processing facility atLockheed Martin Corp. in Sunnyvale, Calif.

"We did not know thecause, and we did not know the impact at the time," Davis said. "Wejust knew that we stopped all work. We froze what was going on, and we got ateam together over that weekend that got out to Lockheed Martin on Mondaymorning to start investigating the status of the spacecraft and the cause ofthe accident."

Engineers immediately beganexamining the satellite to see if it was repairable.

"There was asignificant amount of damage. No two ways about it," said Jeff VandenBeukel, program director at Lockheed Martin.

It took several months tosurvey the damage and inventory spare parts to make sure the satellitecould be rebuilt, according to Davis.

Because NOAA-N Prime is thefinal satellite in the agency's venerable polar satellite program, officialswere able to use a large inventory of spares left over from earlier missions.

About 75 percent of thecraft's components were replaced with new or spare hardware, Vanden Beukelsaid.

The satellite's supportstructure was reused, along with several other parts. Engineers recertifiedcomponents they decided to keep on the spacecraft, officials said.

Lockheed Martindisassembled the satellite and conducted vibration and thermal tests on everypart engineers planned to reuse.

The repairs cost NOAA morethan $217 million, but much of that money was already budgeted for NOAA-NPrime's planned two-year storage. The satellite was slated to be completed by2005 but was not scheduled for launch until March 2008.

"By using the moneythat we would have paid to keep the spacecraft in storage and keep thespacecraft launch-ready and test during that time, we were able to do therebuild and come very close to balancing the budget," Davis said.

Lockheed Martin alsoforfeited a portion of their profit from the program, Davis said.

NASA, which overseessatellite acquisition, construction and launches for NOAA, established aninvestigation panel to determine the cause of the accident.

The board delivered itsreport a year later, concluding that 24 bolts were not installed to securethe spacecraft to the turnover cart.

The report also detailedshoddy work practices at the Sunnyvale facility and indicted governmentagencies for their failure to detect the deficiencies.

The satellite will joinNOAA's fleet of orbiting observatories that circle Earth to give forecastersinformation to use in medium- and long-range weather outlooks.

The POES system hasprovided a stream of continuous climate data since the launch of the firstTelevision Infrared Observation Satellite in April 1960.

NOAA-N Prime is the lastTIROS satellite in the nearly 50-year-old series.

The satellite's unusualname has caused many observers to ask why craft isn't named NOAA-O, the nextlogical step in the agency's alphabetical pre-launch naming system.

NOAA had planned to developthree more POES satellites, NOAA-O, P and Q, before more capable successorstook over. But officials changed their minds after studying the costs anddetermined current satellites could bridge the gap.

This satellite's name waschosen to differentiate from the cancelled NOAA-O series.

The new polar-orbitingsatellite system is due to begin operations in 2013.