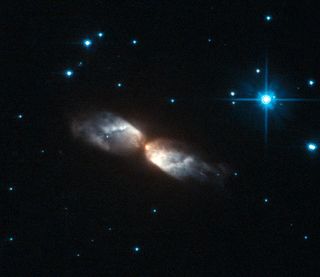 The Hubble Space Telescope captured this striking photo of the dying star, IRAS 20068+4051, which is located in the constellation Cygnus.
(Image: © ESA/Hubble & NASA [Full Story])

The Hubble Space Telescope has takena striking photo of astar in its death throes.

The dying star is throwing off hugeclouds of gas and dust,preparing to enter the planetary nebula stage of its life. But contrarytotheir name, planetary nebulas have nothing to do with planets; the nameinsteadrefers to their superficial resemblance to giant planets when seenthrough earlytelescopes. [New photo of dying star]

Planetarynebulas form when stars like this one ? which is called IRAS20068+4051 ?exhaust their hydrogen fuel. The stars' outer layers expand and cool,creatinga huge, surrounding envelope of dust and gas.

Planetary nebulas emit a broadspectrum of radiation,including visible light, making them greattargets for both amateur and professional astronomers.

However, protoplanetary nebulas,which often appear smallerand are viewed best in infrared light, are much trickier to observe,particularly since water vapor in the Earth?s atmosphere absorbsinfraredradiation at most wavelengths. But, Hubble'ssharp vision and unobstructed vantage point in space make itpossible tocapture good images of these peculiar cosmic objects.

This picture was created from imagestaken through yellow(colored blue in the photo) and near-infrared (colored red) filtersusing theHigh Resolution Channel of Hubble?s Advanced Camera for Surveys.