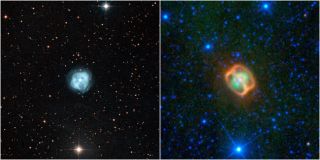 A NASA spacecraft has snapped a photo of two dying stars encircled by vast rings, a view that scientists describe as a cosmic jellyfish floating in a starry sea.

NASA's Wide-field Infrared Survey Explorer (WISE) telescope took the eye-catching snapshot, which depicts a pair of dying stars surrounded by fluorescing gas and two unusual rings, the likes of which astronomers had never seen before. [Photo of the cosmic jellyfish stars]

"I am reminded of the jellyfish exhibition at the Monterey Bay Aquarium — beautiful things floating in water, except this one is in space," said Ned Wright, principal investigator of the WISE mission at UCLA and a co-author of a new study on the discovery.

The structure, known as NGC 1514 — or the "Crystal Ball Nebula" — is located about 800 light-years away in the constellation Taurus.

NGC 1514 belongs to a class of objects called planetary nebulas. Nebulas have nothing to do with planets. The term was coined by Sir William Herschel — who discovered NGC 1514 in 1790 — to describe similar objects with circular, planet-like shapes.

Planetary nebulas form when dying stars toss off their outer layers of gaseous material. Ultraviolet radiation from a central star — or, in NCG 1514's case, a pair of central stars — causes this shed gas to fluoresce with colorful light.

The result is often striking — in fact, planetary nebulas have sometimes been called "the butterflies of space."

Nebulas with asymmetrical, cloudy wings are common. But nothing like the newfound rings around NGC 1514 had been seen in them before, researchers said.

These rings are made of dust ejected by the dying pair of stars at the center of NGC 1514, researchers said.

This burst of dust collided with the walls of a cavity that was already cleared out by stellar winds, forming the rings.

The research is detailed in a recent issue of the Astronomical Journal.

The WISE telescope was able to spot the rings for the first time because their dust is being heated and therefore glows with infrared light, which WISE can detect. In visible-light images, the rings are hidden from view, drowned out by the brightly fluorescing clouds of gas.

"This object has been studied for more than 200 years, but WISE shows us it still has surprises," said study lead author Michael Ressler of NASA's Jet Propulsion Laboratory in Pasadena, Calif.

Infrared light has been color-coded in the new WISE picture so that the different hues — such as blue, turquoise, green and red — represent different wavelengths of light. The dust rings stand out in a vibrant orange color.

The greenish glow at the center of the image is an inner shell of material, blown out more recently than an outer shell that is too faint to be seen in WISE's infrared view. The white dot in the middle is the central pair of stars, which are too close together for WISE to see separately.

NGC 1514's structure, though it looks unique, is probably similar in overall geometry to other hourglass nebulas, Ressler said. The structure looks different in WISE's view because the rings are detectable only by their heat.

Launched in December 2009, the WISE telescope has catalogued hundreds of millions of asteroids, stars and galaxies, researchers said.

In late September, after covering the sky about 1 1/2 times, WISE ran out of the coolant needed to chill its infrared detectors.

The spacecraft is still scanning the heavens with two of its four detectors, operating under an extended mission called NEOWISE. NEOWISE focuses primarily on comets and asteroids, including near-Earth objects — bodies whose orbits pass relatively close to Earth's orbit around the sun.

More oddball finds like NGC 1514's rings are likely to turn up in the plethora of WISE observations, researchers said.

The first batch of the probe's data will be released to the astronomical community in spring 2011.