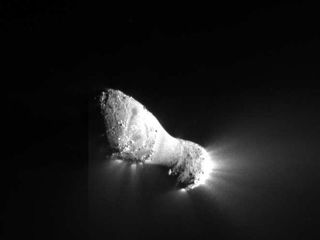 A comet visited by a NASA spacecraft this month is spewingjets of vaporized dry ice into space, scientists have found.

"Previously it was thought that water vapor from waterice was the propulsive force behind jets of material coming off of the body, ornucleus, of the comet," said Jessica Sunshine, a professor of astronomy atthe University of Maryland who is deputy principal investigator for the missionin which the Deep Impact probe visited Comet Hartley 2.

Deep Impact flew within 435 miles (700 kilometers) of Hartley2 on Nov. 4 and beamed back to Earth a series of close-up photos of thecomet, which has the shape of a chicken drumstick. The images showspectacular jets of gas and particles bursting from many distinct spots on thesurface.

DeepImpact's comet flyby, also known as the EPOXI mission, gave scientists theclearest views yet of any comet, and allowed researchers to link the jets ofdust and gas with specific surface features. The analysis revealed that thejets are primarily made up of carbon dioxide gas and particles of dust and ice.[Gallery:Photos of Comet Hartley 2 Flyby]

"This is a finding that only could have been made bytraveling to a comet, because ground-based telescopes can't detect [carbondioxide] and current space telescopes aren't tuned to look for this gas,"Sunshine said.?

Scientists used three instruments on Deep Impact ? twotelescopes with digital color cameras, and an infrared spectrometer ? to study thecomposition of the comet's surface material, its jets and its coma, which is acloud of particles around its core.

So far the team has found that water and carbon dioxidedominate the infrared spectrum of Comet Hartley 2's environment, and thatorganic material, including methanol, is present at lower levels.

The scientists were surprised to observe so much carbondioxide escaping from the comet.

"The distribution of carbon dioxide and dust around thenucleus is much different than the water distribution, and that tells us thatthe carbon dioxide, rather than water, takes dust grains with it into the comaas it leaves the nucleus," said assistant research scientist Lori Feaga."The dry ice that is producing the [carbon dioxide] jets on this comet hasprobably been frozen inside it since the formation of the solar system."

Compounds such as carbon dioxide, and not water, may be acommon characteristic of other comets, too.

When Deep Impact flew by its first comet, CometTempel 1, in 2005, scientists were ?unable to conclusively trace the carbondioxide to the comet's surface because the hemisphere that appeared to beenhanced by the dry ice was in darkness during that encounter.

NASA and the science team at University of Maryland recycledDeep Impact to a second comet ? ultimately Hartley 2 ? to learn more about thediversity of comets. This eventually became the EPOXI mission.

The images of Hartley 2 reveal it has an elongated nucleus1.24 miles (2 kilometers) long and 0.25 miles (0.4 km) wide. The nucleus of Hartley2 is only the fifth cometary nucleus ever seen, and it exhibits similaritiesand differences to the bodies or nuclei of other comets.

The team expects to announce more science findings in thecoming weeks, as new data from the closest approach continue to be received ata rate of some 2,000 images a day.

NASA plans to hold a press conference to discuss the latestdiscoveries from the Comet Hartley 2 flyby on Thursday (Nov. 18).