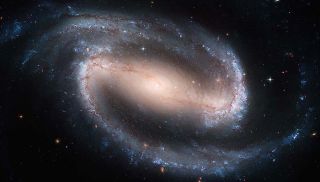 This beautiful image is from the Hubble Space Telescope and shows the galaxy NGC 1300 which is a classic example of a barred spiral.
(Image: © Hubble Heritage Site [Full Story])

The bar-shaped structure of starsthat spans the center ofmany spiral galaxies, including our own Milky Way, may play a role indestroyingthose galaxies, a new study suggests.

Researchers found that spiralgalaxies where star formationhas stopped are about twice as likely to have central bars ? hugelinear formations? as galaxies that are still actively birthing stars. The researchersalsocontend that those bars are the main suspects for choking off starformation,though how this could happen remains a mystery. [Photo of abarred spiralgalaxy.]

It is also possible that the bars aresimply a side effectof the mysterious star-snuffing mechanism, researchers said. In anyevent, theobservation could help astronomers better understand the future of ourownMilky Way, which has a prominentcentral bar.

An army of volunteers

The original GalaxyZoo asked volunteers to help classify galaxies by shape ? forexample, aselliptical or spiral. Galaxy Zoo 2 is building on this work by askingmembersof the public to look more closely at 250,000 galaxies, includingdeterminingif they have a central bar or not.

With this information ? thelargest-ever sample of galaxieswith visual bar identifications ? researchers found that red spiralgalaxies are about twice as likely as blue spirals to hostbars.

The colors are significant. Bluegalaxies get their hue fromthe hot young stars they contain, implying that they are forming starsin largenumbers. In red galaxies, this star formation has stopped, leavingbehind thecooler, long-lived stars that give them their reddish color.

"For some time, data have hinted thatspirals with moreold stars are more likely to have bars, but with such a large number ofbarclassifications we?re much more confident about our results," saidstudyleader Karen Masters of the University of Portsmouth in a statement."Andall of this is thanks to the dedication of the volunteers who providethe raw'clicks.'"

The research will be detailed in anupcoming issue of the journalMonthly Notices of the Royal Astronomical Society.

About half of all spiral galaxieshave a bar structure. Thesebars are important in the evolutionof galaxies, providing a way to move material in and out inthe spiraldisk, and possibly helping to spark star formation in the centralregions,researchers said.

Bars may even help feed the centralmassive black hole thatseems to be present in almost all galaxies, researchers said. Butastronomersare still unclear on why some galaxies have bars and others do not.

It's also unknown if the bars somehowcause galaxies to stopforming stars, or if they're just a consequence of some as-yet unknownprocess,researchers said.

?It?s not yet clear whether the barsare some side effect ofan external process that turns spiral galaxies red, or if they alonecan causethis transformation," Masters said. "We should get closer toanswering that
question with more work on the Galaxy Zoo data set.?

Masters expressed appreciation forthe Galaxy Zoo 2 users'help. For their part, many of the volunteers were happy to be ofassistance.

"I had fun doing my bit, and my highschool studentswere involved, too," said one Galaxy Zoo 2 volunteer, schoolteacherMikeTracey. "It is great to be part of a real-life project which canproducereal science."