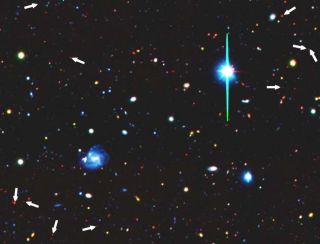 The white arrows point to a few of the old, massive galaxies found by Hartley and his team at a distance of 10 billion light years, discovered in the UKIDSS Ultra-Deep survey. This cut-out image represents just 1/150th of the full survey. (
(Image: © UKIDSS UDS survey team))

When scientists peer at distant galaxies, it's like lookingback in time because their light has taken so long to reach us. Recently, twogroups of astronomers were able to see two classes of unique galaxies from theearly universe.

One group glimpsed galaxies that looked old even when theuniverse was young, suggesting they must have been some of the first galaxiesto form after the birth of the universe. The other group found galaxiesdating from the strongest burst of star formation in the universe.

The former set of galaxies seem to have reached an advancedstage of life even as the universe was in itsinfancy.

"They're already kind of dying," said Will Hartley, a Ph.D. student at the Universityof Nottingham in the U.K. who led the team that discovered them. "They'vemostly finished forming stars."

The galaxies give awaytheir elderly and inactive status by their reddish color, indicative of oldstars. The astronomers saw them as they were 4 billion years after the BigBang.

"It is a puzzle and a challenge for us to explain howthese galaxies formed their stars so quickly that they are already deadgalaxies when we observe them," Hartley told SPACE.com.

The scientists thinkthe objects must have been among the very first galaxies born in our universe.They would have formed from the few clumps of higher density stuff in themostly smooth spread of matter at the time. Therefore, they were more massivethan the average galaxies that formed later, so they probably remain as some ofthe largest galaxies around today.

Another group ofscientists, led by Scott Chapman of the Institute of Astronomy in Cambridge,U.K., discovered galaxies likely undergoing tremendous bouts of starformation.

"Here we've maybediscovered a population of galaxies that is very, very vigorously formingstars, but maybe for a short period of time," said Frank Bertoldi, anastronomer at the University of Bonn in Germany who worked on the study.

The scientists think these galaxies form stars at moremoderate rates most of the time, but happen to be in a rare period of extremestar creation.

"Maybe onlyten percent of their lives are they in such a state of high starformation," Bertoldi said.

These bouts of extremestar production are likely triggered by collisionswith other galaxies that stir up the galaxies' gas. Galaxies collided moreoften at this early stage because the universe was smaller, so they were morecrowded together. More recently, the universe has been expanding, space isgetting emptier and collisions happen less frequently.

The astronomers sawthese prolific galaxies as they were 3 billion years after the Big Bang,offering a view of the early epochs of star formation in the universe.

These galaxies had beenmissed by previous searches for similar galaxies that favored the discovery ofslightly colder galaxies.

"This is one class of objects, a particular phase inevolution, that has been missed so far," Bertoldi said. "We hadn'tdiscovered them because we had a bias in our selection."

The scientists hope to find more galaxies like these to betterunderstand the dynamics of rapid star formation in the early universe.

Chapman will also present the group's findings today at the National Astronomy Meeting.