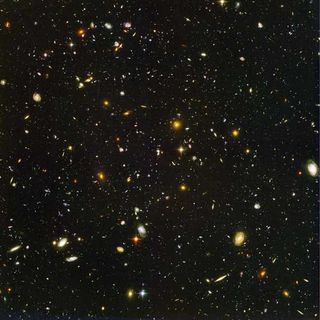 This view of nearly 10,000 galaxies is called the Hubble Ultra Deep Field. The snapshot includes galaxies of various ages, sizes, shapes, and colors. The smallest, reddest galaxies, about 100, may be among the most distant known, existing when the universe was just 800 million years old. The nearest galaxies--the larger, brighter, well-defined spirals and ellipticals--thrived about 1 billion years ago, when the cosmos was 13 billion years old.
(Image: © NASA, ESA, and S. Beckwith (STScI) and the HUDF Team)

Recent images from the depths of cosmos show more than 500 galaxies in the early universe, scientists reported today.

The galaxies-viewed with the Hubble Space Telescope-existed less than a billion years after the Big Bang, the purported birth of our universe, and flourished when the cosmos was less than 7 percent of its current age.  They are smaller than most of today's giant galaxies and sport a blue shade, a signature of blazing star births.

The blue light, which took almost 13 billion years to arrive on Earth, was shifted to a red color because the expansion of space stretches the wavelength of light. This redshift helps astronomers figure out when the light was emitted.

"Finding so many of these dwarf galaxies, but so few bright ones, is evidence for galaxies building up from small pieces-merging together as predicted by the hierarchical theory of galaxy formation," said study leader Rychard Bouwens, an astronomer at the University of California, Santa Cruz.

Hierarchical theory of galaxy formation proposes that larger galaxies formed as smaller galaxies were smashed together.

Bouwens and his colleagues also found that these early galaxies were producing stars at a very fast rate, almost ten times the rate of star production in nearby galaxies.  This observation sways the debate of whether the hottest stars in the early universe provided enough radiation to reheat the hydrogen gas that had started cooling since the Big Bang.

The universe's theoretical birth generated lots of hot hydrogen and helium ions that quickly expanded. But the expansion of space soon cooled the matter. The ultraviolet radiation from the galaxies, however, turned the cold, dark hydrogen to hot and transparent plasma over a few hundred million years.

"Seeing all of these starburst galaxies provides evidence that there were enough galaxies 1 billion years after the Big Bang to finish reheating the universe," said study team member Garth Illingworth of the University of California, Santa Cruz. "It highlights a period of fundamental change in the universe, and we are seeing the galaxy population that brought about that change."

The finding will be detailed in the Nov 20 issue of the Astrophysical Journal.