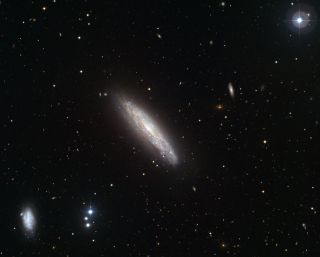 This visible light image, made with the Wide Field Imager on the MPG/ESO 2.2-metre telescope at the La Silla Observatory in Chile, shows the galaxy NGC 4666 in the centre. It is a starburst galaxy, about 80 million light-years from Earth, in which particularly intense star formation is taking place. The starburst is thought to be caused by gravitational interactions with neighboring galaxies, including NGC 4668, visible to the lower left.
(Image: © ESO/J. Dietrich [Full Story])

Thestarburst galaxy NGC 4666, located about 80 million light-years away from Earth, is ahotbed of intense star formation, which is thought to be caused bygravitational interactions between NGC 4666 and its neighboring galaxies, oneof which is visible in the lower left of the new photo. [See the galaxy NGC4666 photo]

Strongwinds from the massive stars inside NGC 4666, combined with supernova explosions, drive a robust flow of gas ? a so-called "superwind" ? fromthe galaxy into space, according to the European Southern Observatory where astronomerstook the new photo.

The superwind originates in the bright central region ofthe galaxy and extends for tens of thousands of light-years. Astronomers think the cosmic wind could be blowing at speeds of up to a few thousands of kilometers every second, said astronomer J?rg Dietrich of the University of Michigan. The new photo of the galaxy was part of follow-up observations for an earlier study by Dietrich and his colleagues.

Thegas is very hot and emits radiation mostly in the form of X-rays and in theradio part of the spectrum, which cannot be seen in visible light images.

Thisnew image of NGC 4666 was made in visible light with the Wide Field Imager onthe MPG/ESO 2.2-meter telescope at the La Silla Observatory in Chile, which ispart of the European Southern Observatory.

Thegalaxy had previously been observed in X-rays by the European Space Agency's XMM-Newton space telescope, and this image was taken to allow further study ofother objects that had been detected in the earlier X-ray observations.

Onesuch object is a faint galaxy cluster that can be seen close to the bottom edgeof the image, to the right of center. This cluster, serendipitously found fromthe XMM-Newton observations, is much farther away from Earth than NGC 4666, ata distance of about 3 billion light-years.

Instudying astronomical objects, researchers must observe them at severalwavelengths, as light at different wavelengths can show different physicalprocesses that are taking place.