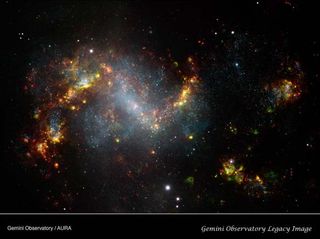 The starburst galaxy NGC 1313, as imaged by the Gemini South 8-meter telescope in Chile using narrow-band filters in the Gemini Multi-Object Spectrograph. NGC 1313 has a well-defined bar with twisted, asymmetric spiral arms. While pronounced star formation appears along the outer reaches of both arms, it’s much stronger to the northeast (left on the new Gemini image). Other regions of star formation are nearby, especially to the southwest (right). Full Story.
(Image: © Gemini Observatory)

A new photo of a distant galaxy has revealed a frenzy of starformation driven by what scientists are calling a cosmic"superbubble."

The new image shows the starburst galaxy NGC 1313, which hasbeen experience active star formation that astronomers have been at a loss toexplain. Radio telescope observations suggest that the edge of an expanding"superbubble" is causing gas to pile up and spur the formation ofstars.

"What triggered the superbubble is still a mystery. Itwould have required about a thousand supernovae to go off in the space of justa few million years, or else something punched its way through the disk and setit off like ripples in a pond," said Stuart Ryder, Australian GeminiScientist at the Anglo-Australian Observatory, who has studied this galaxyextensively.

The unprecedented detail and clarity of the new image ?taken with the Gemini Multi-Object Spectrograph on the Gemini South telescope ?reveals myriad bubbles, shock fronts, star clusters, and sites where massivestars are being born.

Multitudes of colorful glowing gas clouds can be seen in thenew galaxy view. It was taken using the Gemini South telescope in Chile. [Moregalaxy photos.]

NGC 1313, a barred spiral galaxy about 15 millionlight-years away, is a particularly prolific star maker for its size and its relativeremoteness from other galaxies.

The galaxy itself extends across about 50,000 light-years(about half the extent of the Milky Way) and is located in the direction of thefar southern constellation Reticulum. One light-year is the distance that lightcan travel in one year ? about 6 trillion miles (10 trillion km).Generally, starburstgalaxies show some signs of interaction with another galaxy, and a closegalactic encounter is usually responsible for sparking increased levels ofstar-birth activity. However, NGC 1313 is a neighborless "drifter,"far away from any other packs of galaxies.

The cause of its deformed shape and high rate of starformation is not obvious. Astronomers speculate that nearby gas clouds may befalling into (or orbiting) the galaxy and this could be prompting localizedstarbursts.