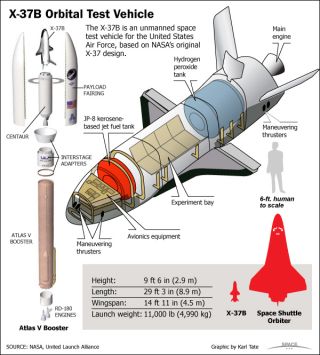 This SPACE.com graphic takes a look inside the X-37B space plane and its Atlas 5 rocket.
(Image: © Karl Tate, SPACE.com)

Theorbit-raising maneuver was first noticed Aug. 14 by amateur skywatcher GregRoberts of Cape Town, South Africa, when the object failed to appear aspredicted by the last known orbit. After several nights of searching, Roberts foundit again on Aug. 19, which enabled the new orbit to be estimated withsufficient accuracy to easily locate the X-37Bspace plane on subsequent nights.

Thatdetective work led to other sky-sleuthing detections by Alberto Rango in Rome andBrad Young in Tulsa, Okla. Their sharp-eyed skills were essential in refiningthe calculation of the space plane's new orbit and confidently determining thecircumstances of the orbit-raising maneuvers. [Photosof the X-37B space plane.]

Alsocalled the Orbital Test Vehicle-1 (OTV-1), the hush-hush X-37B ? a roboticreusable spacecraft ? ?was launched April 22 atop an Atlas 5 rocket from CapeCanaveral, Fla. From that point onward, mum has been the word about what it'sup to.

AirForce officials have said only that the winged spacecraft is undergoing plannedmission tests.

"Followingthe successful launch and initialization, the first flight of the X-37B OrbitalTest Vehicle (OTV-1) continues to focus on checking out the on-orbitperformance of the vehicle and proving the technologies required forlong-duration, reusable space vehicles with autonomous re-entry and landingcapabilities," Air Force spokesman Andy Roake told SPACE.com in a statement.

TheX-37B had circled Earth for 123 days as of Monday. Air Force officials have saidthe unmanned spacecraft could stay in orbit for around 270 days.

Thisweek the space plane is expected to fly over many North American cities andtowns, according to the satellite-watching website Spaceweather.com.Skywatchers who know where to look using telescopes have a chance to seethe X-37B space plane, weather permitting.

Akey team member of the amateur network and an eyes-glued observer and analystof X-37B's flight is Ted Molczan of Toronto.

Molczanis part of the amateur skywatching group that initially spotted the space planein May and recorded videoof the X-37B in space using ground-based equipment.

"Toput this into perspective, these are five out of the eight fixed AFSCN trackingstations, and X-37B?s orbit only passes within range of six stations,"Molczan said. "Diego Garcia was the one of the six that was out of rangefor the orbit-raising. So it seems reasonable to conclude that the coincidenceis meaningful."

Fromlaunch until Aug. 9, the X-37B was in a 40-degree orbit, zipping around theEarth at a 250-mile-by-260-mile (403 km by 420 km) orbit. It maintained anearly constant altitude by making frequent small maneuvers to counteratmospheric drag, Molczan said.

Themystery space plane?s first orbital adjustment occurred near its apogee (highpoint of orbit), raising its orbit to approximately 260 miles by 276 miles (420km by 445 km). The final maneuver occurred near the next high point of itsorbit, which happened to coincide near overhead passes of Vandenberg Air ForceBase in California and Schriever Air Force Base in Colorado. The resultingorbit was 268 miles by 276 miles (432 km by 445 km), Molczan noted.

Asfor whether the space plane's orbit change relates to its imminent return toEarth, slated to be at Vandenberg, Molczan told SPACE.com he doesn?t think so.

"Thespacecraft has considerable cross-range capability, so I suspect that phasingmaneuvers for landing seldom would be required. Had this been a phasingmaneuver, I suspect it would have been smaller, and a decrease in altitude.Very small maneuvers well ahead of a planned landing can bring about anyrequired shift in ground track," he said.

Littleis known about the classifiedduties of the X-37B. However, Air Force officials did make it clear in pre-launchstatements that the craft?s first mission would focus on proving technologiesnecessary for long-duration reusable space vehicles with autonomous re-entryand landing capabilities.

Accordingto the Pentagon, a second X-37B is under construction. This SPACE.com X-37Bgraphic illustrates some details of the space plane and its relative size.

Therobotic mini-plane resembles the space shuttle and is equipped with a payloadbay about the size of a pickup truck bed.

Thespacecraft's new mission is overseen by the Air Force Rapid CapabilitiesOffice. The X-37B is believed to be operated by contractors under the directionof Air Force Space Command's 3rd Space Experimentation Squadron at SchrieverAir Force Base.

TheX-37B is designed to orbit Earth at altitudes of up to 500 nautical miles,loiter in orbit for up to 270 days, then re-enter the atmosphere to make anautomated landing at Vandenberg.

?"Afterthe test objectives are satisfied, we look forward to a successful re-entry andrecovery at Vandenberg Air Force Base, California, and post-landingrefurbishment of the vehicle," said Roake, the Air Force spokesman. "Nolanding date has been scheduled."

LeonardDavid has been reporting on the space industry for more than five decades. Heis past editor-in-chief of the National Space Society's Ad Astra and Space Worldmagazines and has written for SPACE.com since 1999.