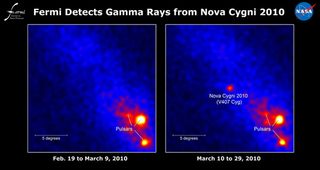 Fermi's Large Area Telescope saw no sign of a nova in 19 days of data prior to March 10 (left), but the eruption is obvious in data from the following 19 days (right). The images show the rate of gamma rays with energies greater than 100 million electron volts (100 MeV); brighter colors indicate higher rates.
(Image: © NASA/DOE/Fermi LAT Collaboration [Full Story])

Anunexpected and powerful new kind of star explosion has been discoveredin theheavens ? a so-called gamma-ray nova that radiates the most energeticform oflight in the universe.

Anova is a massive thermonuclear explosion from a whitedwarf star fueled by mass from a companion star. Unlike supernovas,novasdo not result in the destruction of their stars. Researchers hadexpected andseen X-rays from the resulting waves of expanding gas in prior novas.Butunlike with supernovas, they had not seen gamma-rays emitted by novas.

Thegamma rays in question emerged from the binary system known as V407Cygni some8,800 light-years away, which consists of a white dwarf and a pulsatingredgiant star. They came after a nova spotted by amateurJapanese astronomersin March, which at its peak was just below the level of naked-eyevisibility,brighter than at any other point in the nearly 75 years scientists hadwatchedthe system.

Theresearchers suggest the gamma rays were generated when the blast wavesfrom thenova collided with the very dense winds from the red giant.

"Asthe blast wave propagates outward, it acts like a snowplow, sweeping upmaterial from the stellar wind, and a shock front forms," explainedresearcherAdam Hill, an astrophysicist at the University of JosephFourier-Grenoble inFrance.

Protonsand electrons get accelerated to very high energies at this shockfront. Inturn, they produce gamma rays.

Inmany novas, the white dwarf's companion is a normal main sequence star,and assuch has a much less dense stellar wind compared to the red giant inV407Cygni, for less material to generate gamma rays with. Very few binarysystemsare expected to combine the kind of whitedwarf stars that burst with novas with red giant companions,and as suchthe researchers expect gamma-ray novae to be quite rare.

"Itis always exciting to discover something new and unanticipated," Hillsaid. "It is occasions such as this which is why I enjoy being ascientist."

Theresearchers at the Fermi-LAT Collaboration detailed their findings intheAugust 13 issue of the journal Science.