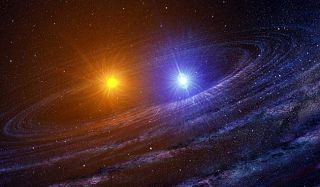 Artist concept of the RS Ophiuchi binary system shortly after a white dwarf (right) has exploded as a nova. Scientists have detected dust in the system, depicted here as spiral dust lanes.
(Image: © Casey Reed)

For years,researchers have observed swirling dust clouds around systems called recurringnovas, which periodically explode. New images of a distant novahave now overturned astronomers' long-standing assumption that the dustoriginates in the blasts.

Scientists recentlyobserved the RS Ophiuchi system, where a small white dwarf star and large redgiant orbiteach other. Over time, the giant sheds its outer layer of gas, which thedwarf sweeps up. The little star's mass grows gradually, eventually reaching atipping point, when the top layer ignites in a thermonuclear explosion andexpels the surface into space. The process then starts over — astronomers havealready seen this system "go nova" in 1898, 1933, 1958, 1967 and1985.

When RSOphiuchi blew again in February 2006, researchers took advantage of a newinstrument, called the Keck Nuller, at the W. M. Keck Observatory in Mauna Kea, Hawaii, to watch the event in action. The Nuller used two giant telescopes toblock out the overwhelming light from the explosion so scientists could studyits fainter surroundings.

They weresurprised to see no dust in the bright zone around the star and only to seedust farther away, where the blast wave had not yet reached. The researcherssurmised that the detonation had vaporized nearby dustparticles, and that the outer dust must have been created before the bang.

"Thisflies in the face of what we expected," said Richard Barry, an astronomerat NASA's Goddard Space Flight Center in Greenbelt, Md., who headed up theobservations. "Astronomers had previously thought that nova explosionsactually create dust."

The teamsuspects the dust is really produced when the white dwarf plows through the redgiant's trail of debris, creating patches of gas where atoms are cool and denseenough to clump together into dust particles.

The findingswill be detailed in the May 1 issue of the Astrophysical Journal.