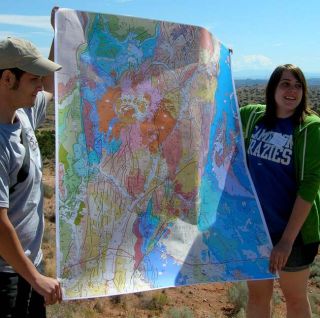 Allison Wetz and Martin Schmieder hold up a map that describes the complicated geology of the region near Santa Fe, New Mexico.
(Image: © Leslie Mullen)

Ona winding road near Santa Fe, New Mexico, exposed mountain walls form anintricate mosaic of brown, yellow, pink and grey rocks that stretch up towardthe deep blue sky. To the untrained eye, these rocks are just a random jumbleof different shapes and colors. To a geologist, however, such rock outcrops cantell a compelling story about the distant past.?

Evidencesuggests that a largemeteorite smashed into this area long ago. The force of the impactshattered the ground and tossed broken and pulverized rocks far and wide. [Earth'sMeteor Craters]

Scientistsare currently studying the Santa Fe impact structure to determine when thisevent took place. Right now they can only say the meteorite struck sometime between1.2 billion and 330 million years ago. Certainly it happened far enough in thepast for the impact crater to be completely altered or eroded.?

Complicatingthe question is the ?Great Unconformity?, an event that wiped about a billionyears of history out of the geologic record of this region. The disappearanceof these tons of rocks was due to erosion -- seas receded, and the newlyexposed rocks wore away through wind, rain and other weathering processes. Thenthe seas flooded in again and sediments began forming new layers.?

Theresult is that a 330-million-year-old rock layer now lies directly on top of rocksthat vary between 1.2 to 1.6 billion years old, depending on the location.

Wheneverthe impact occurred, scientists estimate the crater it carved out of the Earthwas once between 6 to 13 kilometers in diameter. This makes it much larger thana more famous impact crater in this region: the 1.2 kilometer-wide MeteorCrater in Arizona.

ThisPreview is for a Select Audience

Mostof the time, geologists study impact craters by digging a hole down into thebase of the crater floor. They cut out a cylinder of rock, known as a ?core,?that is typically a few inches in diameter and several feet long. The rocklayers of a core can give scientists a general idea of what the ground lookslike deep beneath their feet.?

Comparedto the limited view of a core sample, the exposed rocks on the Santa Fe mountain road are an enormous movie screen that projects a 3-D feature of theaftermath of an impact.?

?Suchimpact crater cross-sections are extremely rare in the world,? says HortonNewsom of the University of New Mexico?s Institute of Meteoritics. Newsom andhis colleagues, Shawn Wright and Wolf Elston, recently organized a public fieldtrip to investigate the Santa Fe impact structure and the surrounding area.? (Detailson this and future trips can be found at http://epswww.unm.edu/sftrip/)

Becauseof the lack of a classic crater, geologists might never have known an impactoccurred here if not for the fortuitous rock exposure. The key pieces ofevidence for impact are the numerous ?shatter cones? in what is thought to bethe bedrock beneath the crater floor.?

Thesecone-shaped rocks each have distinctive wavy patterns, as though the rockitself briefly became a flowing liquid before re-solidifying. Aside fromunderground nuclear explosions, shatter cones only form through theinstantaneous hypervelocity force of a meteorite impact.

Inaddition to the puzzle created by the ?Great Unconformity,? knowledge about thehistory of impacts in the southwestern United States is incomplete because theregion has experienced a lot of volcanism over the ages. Volcanoes tend to wipeaway surface features like impact craters, the fresh lava and tectonic activityobliterating evidence the craters ever existed.? One reason Meteor Crater is sowell preserved is because it is relatively young, having formed only about50,000 years ago.?

Anotherproblem with studying impact craters in volcanic regions is figuring out if acrater was shaped by an extraterrestrial projectile, or if instead it wasformed by a violent volcanic eruption.? Despite the different methods of creation,the features can look remarkably similar.?

Howcan scientists tell the difference between one round hole in the ground thatwas made by the inward punch of a meteorite, versus another round hole made bythe outward explosion of underground gas and lava??

TheJemez volcanic field near the Santa Fe impact structure provides a convenientlyclose point of comparison. The field has a ring of several dormant volcanicmountains that are now green with trees and other vegetation.?

Mostof the volcanic activity here occurred between 1.6 million to 600 thousandyears ago, with the last known eruption about 50 thousand years ago (althoughanother volcanic eruption could feasibly happen again sometime in the future).

Besideslooking for tell-tale shatter cones, scientists can compare mixtures of brokenrock, or ?breccia?, associated with the different features.?

Oneof the volcanoes, for instance, produced Battleship Rock ignimbrite, a tallconglomeration of rubble that was once a hot cloud of particles and gases thrownout by the eruption. The impact structure also has large breccia moundsnearby.? Differences in these rock towers can indicate what process made them.?

Forinstance, Battleship Rock has an enormous slab of black obsidian glass thatformed from cooling lava.? Glasses also can form in the heat of a meteoriteimpact, but they tend to be tiny round blobs less than a centimeter in size.?Such glass particles were found in a microscopic analysis of the Santa Fe impact structure shatter cones.

Volcanoesand impacts are Earth?s twin modes of destruction.? Both can raise largetsunamis if they occur in or near an ocean.? Both can alter the environmentalconditions of the surrounding area, and also have global effects by sending hugeamounts of pulverized rock and gas into the sky that blocks sunlight and altersthe chemistry of the planet?s atmosphere.?

Alarge meteorite that slammed into the Yucatan Peninsula 65 million years ago isblamed for the K-Tmass extinction that ended the age of the dinosaurs. Volcanoes have not yetbeen linked to a mass extinction, but they have famously caused more localizedcatastrophes, such as when the eruption of Mount Vesuvius in 79 AD killed mostof the residents of Pompeii.

Discerningthe subtle differences between a volcanic crater and an impact crater isimportant for understanding Earth?s complex history.? This knowledge also couldbe useful in our exploration of Mars.? The surface of Mars is liberally dottedwith impactcraters, and the planet also has a history of volcanism; Olympus Mons, thelargest mountain in the solar system, is a dormant volcano.? Mars even may havevolcanic activity taking place beneath its surface today.?

Scientistsstudying the Santa Fe impact structure admit much more analysis needs to bedone before they fully understand what happened all those years ago.? They hopeto better determine the size of the impact, and also the various effects it hadon the basement rocks that underlie the missing crater.

?Weneed an army of scientists and graduate students studying this site, over many,many years,? notes Newsom.? ?It could take several lifetimes to do all thenecessary work.?