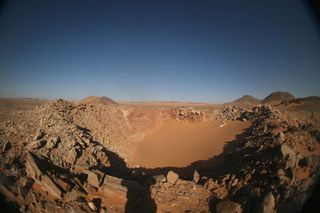 What may be the best-preserved small impact crater ever seenon Earth has been discovered in the remote Egyptian desert, scientistsannounced Thursday.

The crater, called Kamil, is positively pristine whencompared to most holesin the Earth gouged by impacting meteorites. Where many craters on ourplanet are partially eroded, this one retains much of its structure, down toeven the rays of ejected material that were shot from the center when the spacerock hit. [Photo of the new impact crater]

"This crater is really a kind of beauty because it's sowell-preserved that it will tell us a lot about small-scale meteorite impactson the Earth's crust," said study leader Luigi Folco, meteorite curator atthe Museo Nazionale dell'Antartide in Siena, Italy. "It's so nice. It's soneat. There is something extraordinary about it."

Generally, craters this immaculate are found only on themoon or Mars, where there are fewer environmental and atmospheric processesto destroy them, he said.

Holes in the Earth

Based on the size and characteristics of the bowl-shapedcrater, the researchers think it was caused by the impact of an iron meteoriteabout 4.3 feet (1.3 meters) in diameter traveling at 7,920 mph (11,732 kph).

To verify the discovery, a team of geophysicists, includingFoldo, descended on the site in southern Egypt'sSahara desert in February 2010.

"The first real impression when we were in the field ?we could see with our eyes that it was really well preserved and a potentialsource of detailed information about this kind of event," Folco toldSPACE.com.

Folco is lead author on a paper published in the July 23issue of the journal Science announcing the find.

The scientists can't be sure how long ago the Kamil meteoritecrash occurred, but they estimate it was roughly a few thousand years ago ? inother words, relatively recent, in geological terms.

There are only about 175 confirmed Earthimpact craters, even though the planet is barraged by space rocks slamminginto it relatively often. Yet most craters are worn away easily on theever-changing surface of Earth.

"This is important because small impacts are ratherfrequent on Earth ? on the order of one event every 10 to 100 years,"Folco said. "So studying this crater is a good opportunity for scientiststo get to a correct assessment of the hazard small impacts pose to the Earthand to devise mitigation strategies."

Objects about the size of washing machines typically fallinto Earth's atmosphere every month, but most burn up before they can reachthe ground. Many of the resulting fireballs are not seen because they occurover remote areas or over the ocean. The Earth is more than two-thirds ocean.