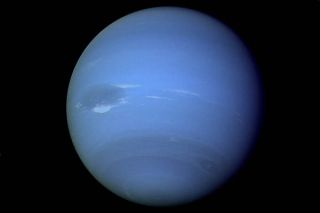 New measurements performed by the European Space Agency's Herschel infrared space telescope indicate that a comet may have hit Neptune, the outer-most planet in our solar system, two centuries ago.
(Image: © NASA)

Newmeasurements of Neptune's atmosphere by a European space telescope suggest thata comet may have crashed into the gas giant about 200 years ago.

Scientistsanalyzed the composition of Neptune'satmosphere using data from the Herschel space observatory. They found apeculiar distribution of carbon monoxide in the gas giant's atmosphere, whichcould be an indication of an earlier comet impact.

Theresearch is detailed in the July 16 online issue of the journal Astronomy &Astrophysics.

Othersimilar collisions between comets (or asteroids) and planets helped theastronomers detect the telltale signs of cometary impacts. [Photos:Jupiter Hit By Asteroid or Comet]

Whenpieces of the comet Shoemaker-Levy 9 slammed into Jupiter in 1994, scientists were able toexamine the trajectory and debris to better understand planetary impacts. Instruments aboard the space probes Voyager 2, Galileo and Ulyssesalso documented every detail of the rare incident.

Thedata now helps scientists detect the telltale signs of cometary impacts thathappened many years ago. Comets, which are sometimes described as "dustysnowballs," leave their mark in the atmospheres of gas giants like Jupiterand Neptune in the form of water, carbon dioxide, carbon monoxide, hydrocyanicacid and carbon sulfide. Trace molecules of these compounds can be detected in theradiation emitted by the planets into space.

InFebruary, scientists from the Max Planck Institute for Solar System Research (MPS)presented strong evidence for a comet impact on Saturn about 230 years ago.That study was published in the February 2010 issue of Astronomy &Astrophysics.

Newmeasurements performed by the Photodetector Array Camera and Spectrometer(PACS) instrument aboard Herschel allowed astronomers to analyze the long-waveinfrared radiation of Neptune. These observations indicate that Neptune may haveexperienced a similar cosmic collision.

Thescientists examined the atmosphereof Neptune, which mainly consists of hydrogen and helium with traces of water,carbon dioxide and carbon monoxide. They detected an unusual distribution ofcarbon monoxide in Neptune's atmosphere, with much higher concentrations in the upper layer,called the stratosphere, compared to the troposphere layer beneath.

"Thehigher concentration of carbon monoxide in the stratosphere can only beexplained by an external origin," said Paul Hartogh, a scientist at MPSand principle investigator of the Herschel science program that examines waterand related chemistry in the solar system. "Normally, the concentrationsof carbon monoxide in troposphere and stratosphere should be the same ordecrease with increasing height."

A cometaryimpact would explain such curious results. The collision forces the comet tofall apart, while the carbon monoxide trapped in the comet's ice is releasedand distributed throughout the stratosphere over the years.

What'smethane got to do with it?

OnNeptune, methane operates in similar ways to water vapor on Earth: thetemperature of the tropopause ? a barrier of colder air that separates the troposphere and stratosphere ? determines how much water vapor can rise into thestratosphere.

Thismeans that a gap in the barrier of the tropopause is the likely culprit for theelevated concentration of methane on Neptune.

Atminus 415 degrees Fahrenheit (minus 213 degrees Celsius), the atmosphere atNeptune's southern pole is six degrees warmer than everywhere else, whichallows gas to pass more easily from troposphere to stratosphere. The methane,which scientists think originates from the planet itself, can therefore spreadthroughout the stratosphere.