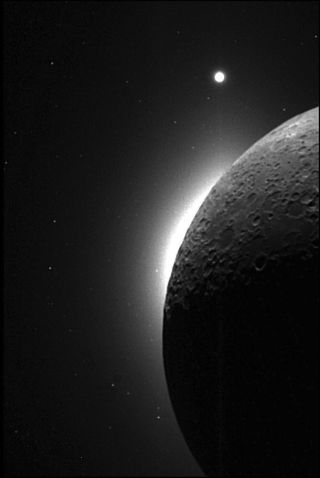 The slim, bright crescent, known as the Lunar Horizon Glow (LHG) was glimpsed several times during Apollo missions. This picture was taken with the Clementine spacecraft, when the sun was behind the moon. The white area on the edge of the moon is the LHG, and the bright dot at the top is the planet Venus.
(Image: © NASA)

When Apolloastronauts first rounded the far side of the moon, they were stunned to find avery bright crescent of light glowing on the horizon at sunset. And, justbefore sunrise, faint columns of light appeared shortly after the glow.

Now, a new modelproposes that fountains of moon dust jet high into the sky and staythere, allowing sunlight to scatter and create glows not usually thought possiblein such a tenuous atmosphere. The electrostatic properties of lunar dust has shifted scientists' attention tothe moon's boundary of day and night, where a very strong electric field maykick dust high into orbit.

Falling and liftingagain in cycles, the lunar dust could create a temporary atmosphere that travelsacross the moon with the moving boundary between night and day.

The slim,bright crescent, known as the Lunar Horizon Glow (LHG), stymied attempts tounderstand it even as it was glimpsed several times during the Apollo 8, 10, and 15 missions, and wasrecorded by robotic cameras as early as 1966.

On Earth,such displays happen when the sun is blocked by our planet and only its outer light is visible, scattering off of dust and moisturein Earth's atmosphere.

But unlikethe Earth, the moon is exposed to space directly without an atmospheric bufferin between. Atoms and molecules so sparse that they rarely collide fill themoon's sky in a layer known as the exosphere. Wind cannot blow, and dust cannotremain suspended very high, because no stack of dense air exists to support theparticles.

At 62 miles(100 km) above the surface, the "excessively bright" crescent and itsstreamers come from an altitude too high for wind-blown dust to achieve anyway,officials with NASA's Goddard Space Flight Center in Greenbelt, Md., said in astatement.

Currentlunar models do not predict large amounts of dust could exist in the moon's sky.

Sunlighthitting the moon's surface causes dust grains to eject electrons, the premisegoes. Due to this constant ionization, the entire day-side of the moon would exhibita positive charge.?

At night, the opposite would occur. Exposed to the plasma blowing from the sun, grains of dust receive electrons and become negatively charged.

Electrostaticrepulsion among like charges could cause dust particles to levitate 3.3 feet (1meter) above the surface all over the moon, scientist Denis Richard of NASA's AmesResearch Laboratory told SPACE.com.

The duststays there like that all night, he said.

But, as the sunsweeps across the lunar plain, surfaces charged one way rapidly would undergo acomplete reversal, generating an enormous electric field in the process.

Levitatedparticles would receive a kick more than a mile into the sky, Richard said. Uponreaching their apex, they drop down in free fall before being smacked up again,in an effect that resembles springing fountains.

"It'ssomething we don?t see anywhere on Earth, and it's something that has directrelevance to space exploration, because if you understand how the dust behavesand is charged, you can prepare for moon exploration," Richard said. "Imagineif the dust is charged really, really strongly, you can have some trouble withspace equipment [?] it can wear off your equipment because it's abrasive."

Though no firmevidence exists yet for the presence of electrically charged dust, much lessfountains, the theory holds more promise among researchers than its rival, thatof stimulated emission by sodium atoms, Richard said.

In 2012,NASA plans to launch the Lunar Atmosphere and Dust Environment Explorer (LADEE) spacecraft, which will collectsamples of lunar dust and particles in the exosphere in order to definitivelyanswer whether a charge exists, and what kinds of molecules are suspended at highaltitudes.

"Sofar, LHG has only been observed near the region where day transitions to night,called the terminator, but it could well be occurring elsewhere," said NASAresearcher Timothy Stubbs at the Goddard Space Flight Center in Maryland. "Thisbegs the question: Is LHG (from atmospheric dust) a global phenomenon or is itconfined to the terminator region?"

"We?re still at the stage of determining whether or not LHG is reallythere — this is one of the major objectives of the LADEE mission," headded.