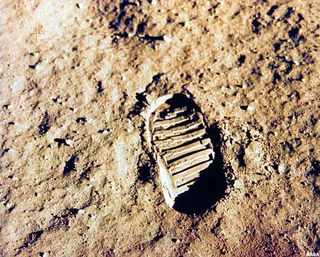 Three decades have passed since Apollo allowed 12 astronauts to walk on the Moon. For some, the images of those moonwalks were unforgettable.
(Image: © NASA)

Like RodneyDangerfield, dust don't get no respect. If you make a laundry list of thematerial contents of the cosmos, you'll be sure to put stars, planets, gasclouds and dark matter on the ticket. But dust? Who cares about such tiny,sticky bits of carbon, silicon and other boring stuff?

Well, abouta century ago, astronomers began to care. Dust first became a subject for thetelescope crowd when they recognized it as an annoyance similar to windshieldgrime. Back in the day, researchers were looking around the MilkyWay, counting the number of stars per square degree in every direction. Thepurpose of this tedious exercise was to locate our position in the cosmos. (Theuniverse was thought to consist of one giant galaxy.) They found that thecounts didn't vary a great deal, suggesting that we are situated near themiddle of things — right downtown.

But in 1930, when R. J. Trumpler proved that smoky clouds of dust fill the tracts betweenstars, blocking our view of the MilkyWay's more distant realms, we realized we'd been fooled. Astronomers werechastened to discover that we're not situated in the Galaxy's scintillatingcentral regions, but in its sedate suburbs. Dumb dust had gotten in our way.

Now let's faceit: the moon seems like dullsville to most folks — after all, it's lacking inseveral important everyday conveniences, such as water and air. But NASA has amandate and plans (if not much of a budget) to go back to the moon, and eventuallyuse it as a springboard for further space exploration — such as sending humansto Mars.

In additionto being a lay-over for trips elsewhere, the moon is a great place to erecttelescopes. There's no churning atmosphere to distort the images in opticalscopes. If radio is your game, then the back side of the moon is the onlyplace in the universe that's perpetually shielded from the cacophony ofterrestrial transmitters. The lunar far side has been proposed as the perfectlocation for a SETI antenna.

But thedust is worrisome. The moon's surface is wrapped in a dust layer between fourinches to a yard deep — a pulverized blanket produced by a few billion years' worthof micrometeorites slamming into the surface. Earth, you'll note, doesn't havethis ubiquitous granular carpet. Our planet is blessed with weather, includingwind and rain, which washes fine particles into rivers and oceans. (This is notto mention the various household sprays that will remove dust from your LouisXIV furniture.)

But withoutany climatic forces to disturb it, the dust on the moon not only stays where it lays,it also retains its jagged nature — the edges of the grains remain sharp. It'sdust with bite.

"Itwill get into anything with moving parts," says Ryan Kobrick, a Ph.D.candidate in the Aerospace Engineering Sciences program at the University of Colorado who's trying to determine the properties of lunar dust.

"Inaddition, sunlight charges up the particles, and they cling together. Think ofthe famous moon-boot photo," says Kobrick. "Facts are, any piece ofequipment could be choked by dust within days."

It's aproblem that's undoubtedly escaped your notice and consideration. It's not,however, trivial.

"You'llhave to design systems with seals, or with gears that are hard enough that theywon't wear," said Kobrick.

I made anobvious suggestion: if this dust is going to cramp our style, why not simplybulldoze it away? Kobrick acknowledged that this might help for a while, but "thedust would still migrate around and eventually get onto any equipment. Remember,it's got an electric charge, and the gravity on the moon is lower, too. It willcrawl up the surfaces of your structure."

Is this ashow stopper? Do we abandon the moon's surface as a useless dust bowl?

Kobrick isn'tthat pessimistic. "Elevating your equipment will help," he confides. "Andmicrowaving the surface under your instrument might be a good idea too, sincethat would melt the dust into a solid mass if the iron content is high enough.

"Butin the end, there's going to be maintenance. You're going to need people toclean out the clogs, and repair the inevitable jams."

I askedKobrick whether, when you got right down to it, that was the best reason tosend humans to the moon: as dust busters.

He laughed."I didn't say that! But dusting is definitely going to be on their to-dolist."