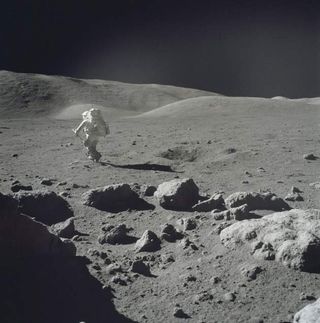 Future explorers of the Moon must deal with a variety of lunar environmental issues, including surface electrification of dust. Another factor is the ever-present, sharp, abrasive, glassy dust of the lunar soil.
(Image: © NASA)

NASA isdrawing up plans to probe the secrets of moon dust using a small orbiter thatwill ride piggyback on another spacecraft?s rocket.

The $80-millionLADEE spacecraft is slated to launch alongside a lunar gravity-mapping probe in2011 on a 100-day mission to study the moon?s wisp-thin atmosphere and ever-presentdust, the agency said Thursday.

A clearunderstanding of the moon?s atmosphere and its clingy dust will be vital forNASA as it moves forward with plans to return astronauts to the lunar surface aboardits Altair lander by 2020.

During the Apollolunar landings between 1969 and 1972, NASA moonwalkers were coatedin lunar dust during excursions and tracked it back inside their landers,where it gave off a smell similar togunpowder. The gritty material can be abrasive, made of sharp, glassygrains, be electrostatically charged and may even be toxic to astronauts if toomuch is inhaled, researchers have said.

"Moondustwas a real nuisance for Apollo astronauts," said NASA researcher MianAbbas, whose team studies the interaction of lunar dust and solar wind at the NationalSpace Science and Technology Center's Dusty Plasma Lab in Huntsville, Ala., ina statement. "It stuck to everything - spacesuits, equipment,instruments."

Accordingto one NASA mission description, LADEE - short for Lunar Atmosphere and DustEnvironment Explorer - is expected to carry at least two instruments, aspectrometer for atmosphere studies and a dust detector aimed at the moon?sgritty regolith.

?Thesemeasurements will provide scientific insight into the lunar environment, andgive our explorers a clearer understanding of what they'll be up against asthey set up the first outpost and begin the process of settling the solarsystem," said Pete Worden, head of NASA?s Ames Research Center in MoffettField, Calif., which will oversee the LADEE mission, in a statement.

The LADEEorbiter is expected to ride in the back seat of an unmanned Delta 2 rocketbehind NASA?s GravityRecovery and Interior Laboratory (GRAIL), a $375-million orbiter designedto parse out the mysteries of the moon?s gravitational field. The twospacecraft will separate only after they are en route to the moon, with LADEEexpected to take about five months to enter orbit and check its systems.

India ispreparing to launch its lunar orbiter, the Chandrayaan-1, later this year withNASA?s Lunar Reconnaissance Orbiter (LRO) to follow later this year. A secondNASA probe, the Lunar Crater Observation and Sensing Satellite, will alsolaunch with LRO and purposely crash two vehicles into the moon to search for hiddenwater ice.