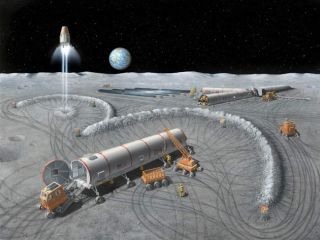 Artist's view of 21st century operations on the Moon. An array of equipment is needed to help sustain a long-term human presence on the lunar surface.
(Image: © Lockheed Martin Space Systems)

GOLDEN, Colorado-The Moon is dusty, grimy, and potentially hazardous to your health.

Ultra-tiny dust grains can gum up the works of vital hardware on the Moon. And there's also a possible risk to health from gulping in the lunar dust-a toxicological twist to "bad Moon rising."

Thanks to the Apollo program there's firsthand knowledge about the Moon being a Disneyland of dust.

Moonwalkers were covered from helmet to boot with lunar dust. Also tagged as the "dirty dozen," astronauts on the various Apollo missions worked long hours in the lunar environment, setting up science equipment and collectively bagged 840 pounds (382 kilograms) of rock and other surface material for shipment back to Earth.

As NASA planners gear up to replant astronauts on the lunar surface before 2020, scientists and engineers are grappling with how best to certify a safe and productive stay for 21st-century moonwalkers.

Mining specialists, researchers, entrepreneurs, and NASA managers took part in the eighth Space Resources Roundtable, held here Oct. 31-Nov. 2 at the Colorado School of Mines and in collaboration with the Lunar and Planetary Institute in Houston, Texas.

"First and foremost is just the fact that the dust just sticks to everything," said Jasper Halekas, a research physicist at University of California, Berkeley Space Sciences Laboratory in Berkeley, California.

From gauge dials, helmet sun shades to spacesuits and tools, the "stick-to-itness" of dust during the Apollo missions proved to be a noteworthy problem, Halekas reported. Most amusingly, he added, even the vacuum cleaner that was designed to clean off the dust clogged down and jammed.

Cernan said that "one of the most aggravating, restricting facets of lunar surface exploration is the dust and its adherence to everything no matter what kind ... and its restrictive friction-like action to everything it gets on." The astronaut added: "You have to live with it but you're continually fighting the dust problem both outside and inside the spacecraft."

Although the lunar environment is often considered to be essentially static, Halekas and his fellow researchers reported at the workshop that, in fact, it is very electrically active.

The surface of the Moon charges in response to currents incident on its surface, and is exposed to a variety of different charging environments during its orbit around the Earth. Those charging currents span several orders of magnitude, he said.

Dust adhesion is likely increased by the angular barbed shapes of lunar dust, found to quickly and effectively coat all surfaces it comes into contact with. Additionally, that clinging is possibly due to electrostatic charging, Halekas explained.

"I think it would behoove us to understand the lunar dust plasma environment as well as possible before we try to come up with detailed dust mitigation strategies," Halekas told SPACE.com. "This would mean characterizing the dust, electric fields and plasma around the Moon and understanding how they interact."

Halekas said that he advocates science experiments either in lunar orbit or on the Moon's surface-preferably both-in order to gauge the problem.

"At this point, we know so little about the near-surface electrodynamic environment and its effect on dust that we can't do much more than conjecture and try to predict the most likely scenario," Halekas said.

Just knowing that the dust is there, Halekas added, tells us that we need to deal with it. "But without more detailed knowledge than we currently have, I think we're handicapped in coming up with effective mitigation strategies."

It is imperative that today's return-to-the-Moon planners recall experiences from the Apollo era, said Larry Taylor, Director of the Planetary Geosciences Institute at the Department of Earth and Planetary Sciences at the University of Tennessee in Knoxville. One problem that was not well anticipated was the ubiquitous, adherent, abrasive, and floating dust problem, he advised.

Taylor emphasized that the most critical effect of lunar dust, however, may be on astronaut health.

With each Apollo mission to the Moon, Taylor said that astronauts remarked about the "gun powder" smell when they took off their helmets inside their lunar lander after climbing back in from a moonwalk.

Several astronauts reported respiratory or eye irritation. It was evident that there was something unusual about the lunar dust, Taylor pointed out. "We've got one hell of a lot of it that's going to be dangerous on the Moon."

Taylor flagged the possibility that ultra-small particles of the lunar dust are capable of moving from human lungs directly into the blood stream. Moreover, these fine particles consist almost entirely of glass containing myriads of nanophase metallic iron-a constituent that might interact with a person's hemoglobin and spur oxygen-depravation effects.

One of the most essential tests to be performed with a first lunar lander in the near-term, Taylor observed, is the chemical reactivity of pristine lunar dust in the size range that can be inhaled by lunar visitors.

Arguably, framing the Moon as some sort of toxic wasteland would be a bit of a stretch.

Countering the pervasive nature of the dust, however, will take some doing-specifically if the lunar landscape is to be reworked with resource-processing paraphernalia and dotted with living quarters.

Habitats will need to be overpressurized to account for inevitable leaks, especially around entrances, Taylor suggested. Fine particles of dust suspended in electrostatic levitation around the Moon, he pointed out, would need to be dealt with so as not to muck up lunar-based astronomy of the surrounding cosmos.

But then there's the ultimate in dust-busting ideas. Enter the suck-it-up and deal with it Lunar Soil Magnetic Collection device-the LSMAC for short.

Working with Taylor on the dust mover scheme is Benjamin Eimer, a postdoctoral researcher at the University of Tennessee.

LSMAC draws upon the elemental iron particles-literally sucking up the lunar soil similar to your autumn leaf sucker, Eimer said. This can be done in similar fashion to the way maglev trains and coil guns work, making use of electro-magnets to pull an object along.

A magnetic system like LSMAC at work on the Moon, Eimer said, would not only pull the iron-tainted soil down a tube but also effectively capture the dust as well. The operation of this "coil vacuum" equipment on the Moon is foreseen as a kind of electronic conveyor belt.

Conceptually, Eimer and Taylor reported that a lunar surface-mining operation could use the LSMAC to gather and transport soil-plus dust-across stretches of moonscape to processing plants. This method of handling and collecting lunar surface materials would help keep in check the stirring up of dust in the process.

"The lunar dust gets into everything and it is harmful in just about every way," Eimer concluded. "That's the take home message ... some form of mitigation, of controlling the dust on the Moon is necessary."