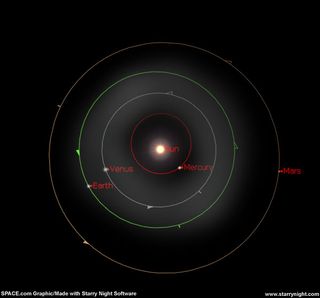 The Zodiacal Light is caused by an enormous cloud of cosmic dust extending outward from the Sun and past the orbit of the Earth. The positions of the planets are shown for mid-November.

During the next few weeks on some clear moonless early morning, if you are fortunate to be far from any haze and bright lights, keep a close watch on the eastern horizon about two hours before sunrise. If you're lucky you might catch a glimpse of a ghostly column of light extending upward into the sky.

Many have been fooled into thinking that it's beginning of morning twilight and indeed the Persian astronomer, mathematician and poet Omar Khayyam (1050? -1123?) referred to this ghostly glow as the "false dawn" in his poem, The Rubaiyat.

That faint ghostly glow was once thought to be solely an atmospheric phenomenon: perhaps reflected sunlight shining on the highest layers of Earth's atmosphere.  We know now that while it is indeed reflected sunlight, it is being reflected not off our atmosphere, but rather off of a non-uniform distribution of interplanetary material; debris left over from the formation of our solar system.

These countless millions, if not billions of particles – ranging in size from meter-sized mini-asteroids to micron-sized dust grains -- seem densest around the immediate vicinity of the sun, but extend outward, beyond the orbit of Mars and are spread out along the plane of the ecliptic (the path the sun follows throughout the year).  Hence the reason for the name Zodiacal Light is because it is seen projected against the zodiacal constellations.

Before the break of dawn

The best time to see the Zodiacal Light is when the ecliptic appears most nearly vertical to the horizon.  For those in the Northern Hemisphere, the best morning views in the eastern sky will come during the next few weeks without the interference of bright moonlight. Conversely, for those who live in the Southern Hemisphere, the best views now are in the western evening sky right after sunset.

For northerners at this particular time of the year, it is just before morning twilight begins (about 90 minutes before sunrise), that the Zodiacal Light should appear at its brightest and most conspicuous.

The Zodiacal Light is something you have to see to believe.

My best views of it came from southeast Arizona back in 2001.  I had chosen that part of the country for a view of a pristinely dark and starry sky to serve as the backdrop for an upcoming display of Leonid meteors.  Imagine my surprise when I stepped outside on my first early morning watch, and was surprised to see what looked like the glow of a town or small city just beyond the horizon to my east.  It took a while for me to realize that what I was seeing was not urban light pollution, but the Zodiacal Light!

To a discerning eye, its diffuse shape somewhat resembles a tilted cone, wedge or slanted pyramid.  At the base of the cone, the light may extend some 20 to 30-degrees along the horizon.  At its best, it can approach or even equal the Milky Way in brightness, but more often than not it is so faint that even a small amount of atmospheric haze can obscure it.  On exceptionally clear nights, the tapering cone might be seen to stretch more than halfway to the zenith.

In fact, should you be blessed with such conditions – absolutely no artificial lighting, smoke or haze – you should also try to see the Zodiacal Band, which runs along the entire ecliptic and usually averages about 5 to 10-degrees in apparent width.

There is yet another ghostly glow in the sky which few have seen or heard about.

This is the Gegenschein, derived from a German word meaning "counterglow," since it is always opposite or "counter" in position to the sun in the sky.  The Gegenschein is visible only with the unaided eye, as it is far too large and diffuse to be viewed with a telescope or even binoculars.

The exact nature of the Gegenschein is still somewhat of a mystery, though most think that – like the Zodiacal Light – it might be some sort of tail formed by minute particles from our atmosphere that are streaming out into space away from the Earth in the opposite direction from the sun.