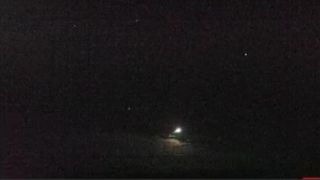 The mothership for Japan's asteroid probe Hayabusa created a spectacular fireball as it burned up in Earth's atmosphere on June 13, 2010 over Australia, 3 hours after releasing its sample return capsule.
(Image: © JAXA via Live-Universe)

A Japanese space capsule returned to Earth and plungedthrough the atmosphere over the Australian outback Sunday, capping a seven-yearspace journey that took it to a nearby asteroid in a historic attempt tocollect pieces of a billion-year-old space rock.

The capsule, released by Japan's Hayabusaasteroid probe, returned around 10 a.m. EDT (1400 GMT) in the WoomeraProhibited Area of South Australia.

The re-entry capsule, which may contain a precious spacerock sample, separated from the rest of the spacecraft about three hours beforeit plummeted down to Earth.

The small 16-inch wide canister planned to land with the helpof a parachute and a heat shield to protect it from the fiery temperatures ofreentry. The rest of the Hayabusa spacecraft was expected to burn up in Earth'satmosphere. [Graphic:How Japan's Hayabusa Asteroid Mission Worked]

The probe will be recovered and transported back to Japan,where scientists will open it and find out whether it succeeded in returning apiece of the asteroid.

The return was monitored by an envoy from NASA, which sentscientists to observe the probe's re-entry through Earth's atmosphere to studyhow its heat shield performed.

"The capsule comes in with the speed of a naturalmeteor ? an asteroid if you like," said Peter Jenniskens of the SETIInstitute in Mountain View, Calif., principal investigator of theNASA observation project. "The velocity is incredible."

Hayabusa, a mission of the Japanese Aerospace ExplorationAgency (JAXA), had a long and tumultuous voyage of roughly 1.25 billion miles(2 billion kilometers). In 2005, the probe landed on the asteroid25143 Itokawa and attempted to dig up a sample to return to Earth.

Glitches during this process prevented the sample collectionfrom going as planned, but scientists are still hopeful that the probe was ableto pick up some asteroid dust or pebbles to bring back with it.

"We won't know for a long time because the capsule willbe recovered, hopefully, and then brought to Japan and opened there,"Jenniskens told SPACE.com.

Even of "only a couple of particles much smaller than agrain of sand" were collected, they would be extremely useful forscientific research, since they would be the first pieces of an asteroid everreturned by a robotic mission, said NASA's Don Yeomans, the U.S. projectscientist for the Hayabusa mission.

Over the years Hayabusa has run into a number of snags thatforced an extra three years to be added on to its mission. A fuel leak, communicationsloss and ion engine problems were just a few that threatened to kill theasteroid probe before it could ever return home.

"They've had to start using duct tape and bailing wireand chewing gun to correct for these things," he joked.

That's why it's so gratifying to many of the researcherswho've worked on the project that the spacecraft is finally home safe.