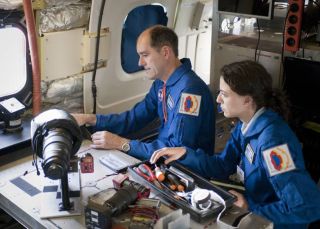 Project scientist Peter Jenniskens of the SETI Institute and NASA's Ames Research Center and Christina Giannopapa of the Netherlands' Eindhoven University prepare lenses for one of the specialized cameras for installation on NASA's DC-8 flying laboratory.
(Image: © NASA /Dryden/Tom Tschida)

NASA has dispatched a jet filled with scientists toAustralia ahead of the long-awaited return of a Japanese asteroid probe, whichbegan its final approach to Earth Wednesday.

A Douglas DC-8 aircraft outfitted to serve as a flyinglaboratory carried 30 NASA scientists to Australia to track the incomingJapanese spacecraft Hayabusa during its fiery re-entry through Earth'satmosphere on Sunday, June 13 at the end of its seven-year trek to an asteroid.

Hayabusa,built by the Japan Aerospace Exploration Agency (JAXA) is expected to drop asample capsule through the atmosphere that, if all goes well, will parachutedown to a landing zone in Australia's Woomera Prohibited Area (WPA).

Hayabusa also fired its ion engine for one last coursecorrection Wednesday to fine-tune its approach to a remote landing zone inAustralia's WPA.

"By this operation, Hayabusa spacecraft was preciselyguided to WPA in Australia," JAXA officials said in an update.

All eyes on Hayabusa

The DC-8 aircraft will give NASA scientists a front row seatto the asteroidprobe's landing.

"Hayabusa is hurtling toward Earth at an immense speed,comparable to that of an asteroid impact," said Peter Jenniskens, theobservation campaign's principal investigator and a scientist at NASA's AmesResearch Center in Moffett Field, Calif., and the SET Institute in MountainView, Calif. "The capsule that protects the asteroid sample will be only6,500 feet ahead of the rest of the spacecraft, which will break into numerouspieces, essentially making it a man-made meteor."

Jenniskens and an pack of eager astronomers ?onboard theDC-8 will have their instruments secured near the plane's specialized windows.At an altitude of 39,000 feet, above light pollution and clouds, the scientistswill be able to study what happens when the spacecraft and sample returncapsule heat up high in the atmosphere.

The team is primarily interested in studying the Hayabusacapsule's re-entry, in order to gain technological insight into the heatshield that designers and engineers can use in developing future explorationvehicles.

Hayabusa's unique heat shield material, shape and thetremendous interplanetary re-entry speed of 7.58 miles per second mean that theprobe's descent will provide new and valuable information about how heatshields that can be used for computer models of re-entry conditions.

In fact, Hayabusa is expected to be the second fastestman-made object to return to Earth. NASA's Stardustsample return capsule set the record re-entry speed of 7.95 miles persecond in January 2006.

"The return of Hayabusa provides NASA and JAXA with arare opportunity to monitor the performance of an atmospheric entry vehicle atspeeds much higher than that of the space shuttle returning from low-Earthorbit," said Jay Grinstead, the observation campaign project manager and aresearch scientist at NASA Ames.

"The spectrum of light emitted by the gas and surfaceat these extreme temperatures tells us about the physics and chemistry ofatmospheric entry," he said. "Our vantage point onboard the DC-8 andthe variety of instruments enable us to track the evolution of the spectrum andcompare it to simulations used for design and analysis of entry systems."

The observation team will also provide JAXA with data andimages that will be obtained during the flight to correlate with the Japanesespace agency's ground optical and radio observations to assist in locating thecapsule once it reaches Earth.

Additionally, since the breakup of the main spacecraft willalso be visible, scientists will use images of the debris to validate computermodels that astronomers use to predict how an object will fragment and disperseupon entering Earth's atmosphere at extremely high speeds.

NASA astronomers made similar airborne studies from the DC-8flying observatory for the September 2008 re-entry of the European SpaceAgency's Automated Transfer Vehicle "Jules Vern," as well as theStardust sample return re-entry campaigns. For these missions, scientistsstudied the light emitted by the descending spacecraft in order to betterunderstand the mechanisms of atmospheric entry heats of? natural and man-madeobjects.