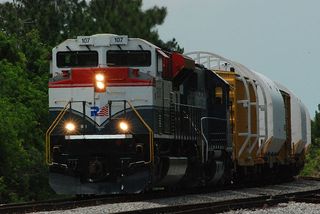 The last set of space shuttle rocket segments arrived inFlorida Thursday after one final train ride from their Utah-based factory.

The rocket pieces were delivered to the Kennedy Space Centerin Florida from Promontory, Utah, where they were refurbished by NASAcontractor Alliant Techsystems (ATK).

The 149-foot (45-meter) boosters are actually reserverockets that would only be used to launch a rescue mission if NASA's final scheduledshuttle flight on Endeavour runs into an emergency.

"I think there was a littlebit of melancholy knowing that these were the last segments to come in,"NASA spokesman George Diller told SPACE.com. "They had a wonderfulheritage, but on the other hand it kind of signifiesthe end of a very storied program for NASA."

Endeavour is currently scheduled to launch that finalplanned shuttle flight in late November. The mission, along with a Septemberflight of Discovery, are NASA's last two shuttle missions remaining before thereusable space plane fleet hangs up its wings for good.

NASA's third space shuttle, Atlantis, landed at the Kennedy SpaceCenter Wednesday to end its 32nd and final scheduled mission. It would beAtlantis that would use these last solid rocket boosters for the emergencyflight, if one is required.

The rocket parts were joined for the last stretch of the trainride by NASA and ATK officials, including shuttle launch director Mike Leinbachand astronaut Mike Massimino.

"I think this is a very historic moment," ATK spokeswomanJessica Rye said in a phone interview. "It gives the team an opportunityto travel with the hardware they?ve worked so hard over the years tomanufacture or manage."

ATK has been building and processing the solidrocket boosters that help propel space shuttles to orbit since the start ofthe program nearly 30 years ago.

"I think it was sort of a bittersweet occasion as wepulled into the train station," Rye said. "ATK is so proud of thelegacy that we have in serving our space shuttle program. For us it was just awonderful opportunity to reminisce and share stories about the legacy of thesolid rocket boosters throughout the program."

The boosters were redesigned after the 1986 shuttle Challengerdisaster, when an O-ring on the right SRB failed to seal, causing the lossof the vehicle and its seven-member crew.

Since then there have been no major issues associated withthe solid rocket boosters.

"They really turned outto be quite reliable in the long run, particularly after they were redesignedafter Challenger," Diller said.

These last rocket segments will be assembled into the twinsolid rocket boosters (SRBs) this summer to ready Atlantis for its potential STS-135rescue flight.

However, there is a slight chance that NASA will shift thisbackup mission to a full-fledged finalshuttle flight to deliver extra hardware to the International Space Station(ISS). NASA and some members of Congress have been lobbying for such a shuttleflight addition.

Nelson pointed out other benefits of an additional flight,such as helping to transition the shuttle workforce to new activities. "Itwill also guarantee U.S. access to space for a longer period of time, andthereby help to close the spaceflight gap until a new domestic capability isprovided."

Whether or not Atlantis flies once more to space, NASA stillwants to fully prepare the shuttle just in case of an emergency with Endeavour.

After initial processing and inspections, the pieces will bestacked into the four-segment boosters that will be strapped to the sides of Atlantis.

The solid rocket boosters work in concert with the shuttle'sliquid-powered main engines to loft the spaceship to orbit.

About two minutes after liftoff the SRBs are jettisoned fromthe shuttle and land by parachute in the Atlantic Ocean. The spent SRBs are thenrecovered by boat and reloaded with propellant to be used for later missions.

"They have only become better over time as we havefound additional ways to make them safe and effective," Diller said.