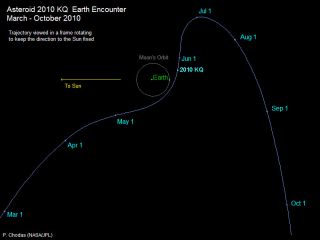 This NASA graphic shows the trajectory of near-Earth object 2010 KQ, which scientists have concluded is likely a rocket remnant and not an asteroid, in May and June 2010. Full Story.
(Image: © NASA/JPL)

A small object that zipped by Earth this month is mostlikely just a wayward piece of space junk left over from an interplanetarymission that launched in times past, NASA officials said Thursday.

The unidentified object, known only as 2010 KQ, flew pastEarth on May 21 at a distance just beyond the orbit of the moon, which is about238,900 miles (384,402 km) from our planet. It isnow slowly moving away from Earth.

After a careful analysis of its trajectory through space,NASA scientists concluded that 2010 KQ is spacejunk from an upper-stage rocket that launched a spacecraft to anotherdestination in our solar system. It is likely just a few meters in size, they found.

Like Earth, the object orbits the sun, scientists were able to calculate.

"The orbit of this object is very similar to that ofthe Earth, and one would not expect an object to remain in this type of orbitfor very long," said Paul Chodas, a scientist at NASA's Near-Earth ObjectProgram Office at the Jet Propulsion Laboratory in Pasadena, Calif., in astatement.

Chodas did not speculate on exactly what mission therocket remnant may be left over from.

2010 KQ was discovered on May 16 by astronomer Richard Kowalski from anobservatory in the mountains north of Tucson, Ariz., as he participated in theCatalina Sky Survey, a NASA-sponsored effort to monitor the cosmos. NASAtracked the object for five days until it made its closest approach.

Follow up observations by astronomer S. J. Bus at theInfrared Telescope Facility atop Mauna Kea in Hawaii took a look at theobject's spectral characteristics, which did not match any known asteroidcategories ? hinting that it is of human manufacture.

The small size estimate for 2010 KQ is based on its relativedimness in observations. The object has an absolute magnitude (a measure ofbrightness) of 28.9. For comparison, a magnitude 1 object shines about 100 brighterthan a magnitude 5 one.

And this is not the last Earth has seen of 2010 KQ. Therocket remnant will return in 2036, but poses little risk of hitting the Earthand no chance of surviving the fiery inferno of atmospheric entry, Chodas said.

"At present, there is a 6 percent probability that2010 KQ will enter our atmosphere over a 30-year period starting in 2036,"Chodas said. "More than likely, additional observations of the object willrefine its orbit and impact possibilities. Even in the unlikely event that thisobject is headed for impact with Earth, whether it is an asteroid or rocketbody, it is so small that it would disintegrate in the atmosphere and not causeharm on the ground."

2036: Year of space junk and asteroids

The year 2036 has special resonance among space rockwatchers. That's the year that another object, the huge asteroidApophis, is also expected to fly relatively close by Earth.

Apophis gained fame as a potentially dangerous asteroidbecause of early predictions that gave it a slight chance of hitting Earth. Inreality, it will miss the Earth on April 13, 2036 by about 18,300 miles (29,450km).

There is only a 1-in-250,000 chance of Apophis strikingthe Earth, odds that NASA considers to be low.

Chodas and other scientists with NASA's Near-Earth ObjectProgram regularly keep vigilant watch on asteroids and space debris todetermine the riskto our planet, as well as among the satellites and spacecraft in orbittoday. They use a network of telescopes on the ground and in space to performthe survey.

NASA also works with the U.S. military's Space SurveillanceNetwork to track potentially dangerous space debris flying in low-Earth orbit. Sofar, there are more than 19,000 pieces of space junk in Earth orbit today, acount which may not include interplanetary bits of junk like 2010 KQ that zipby every now and then.