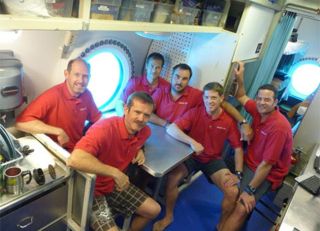 It's a scenario NASA hopes to never to face: An astronaut indistress in a hostile environment in need of a rescue. But in this emergency,the victims are mannequins and the rescuers are professional divers and astronautson the ocean floor practicing exactly how such a scene might play out on themoon or asteroid.

The mock space rescue is just one of several simulationsperformed this week on the by the 14thexpedition of the NASA Extreme Environment Mission Operations, or NEEMO.The divers and astronauts are midway through a two-week mission that began May10.

Canadian Space Agency astronaut Chris Hadfield, a veteranspacewalker, is leading the expedition in the Aquarius Underwater Laboratory,which rests more than 62 feet (18 meters) below the ocean's surface off thecoast of Key Largo in the Florida Keys. His crew, which spoke to reporters fromthe seafloor in a Friday teleconference, plans to return to the surface onSunday.

The crewmembers live aboard Aquarius, which is pressurizedto a level that is slightly higher than the pressure in car tires, and ventureout on simulated spacewalks, called extravehicular activities (EVAs).

"If you're out on a spacewalk on Mars and you're tryingto pick something up and wrench your back, or if you have a heart attack, or ifyour suit malfunctions and you go unconscious, we have to at least protect forone level of failure," Hadfield told SPACE.com. "How can you get aperson in your spacesuit back into the habitat or rover if they can't do itthemselves?"

Hadfield and other NEEMO crewmembers used each other andweighted mannequins to test different ways to execute a rescue.

"We'll have to write our report afterwards, but we'velearned some really positive lessons and some pretty simple rescue devicesbased on mountaineering rescue techniques," Hadfield explained.?

Aquanauts from spaceHadfield previously conducted twospacewalks and operated the International Space Station's robotic arm, known asCanadarm2, during the space shuttle's STS-100 mission in April 2001. He alsoworked extensively with the shuttle's robotic Canadarm on STS-74 in 1995.

"We've been extremely busy and extremelyproductive," Hadfield said. "We have done over 50 spacewalks in twoweeks. The reason we're down here is to simulate spaceflight."

The NEEMO 14 mission is using the ocean floor to simulateaspects of anotherplanet's surface and a low-gravity environment. The objective is to testconcepts for future planetary exploration missions.

"This is the closest simulation I've had," ThomasMarshburn, NEEMO 14 team member, NASA astronaut and flight surgeon, toldSPACE.com. "It certainly is alien ? we're moving around as if we're in analtered gravity environment. It feels like a dangerous environment, which iswhat space is."In October 2009, a team of aquanauts prepared for the NEEMO14 expedition by placing mockups of a lander, rover and small crane thatsimulates a robotic arm near the Aquarius laboratory. The rover and landermockups are comparable in size to vehicles that NASA is considering for futureplanetary exploration.

"We're simulating different gravities," Hadfieldsaid. "With the water, you can simulate being on Mars, being on the moon,or even on an asteroid."

The lander mockup is wider than the entire length of aschool bus, and is almost three times as high. It measures 45 feet (13.7meters) wide and 28 feet (8.5 meters) high, including a 10-foot-high(3-meter-high) crane. The rover mockup is slightly larger than a full-size SUV,standing at approximately eight feet (2.4 meters) tall and 14 feet (4.3 meters)long. The aquanauts also donned center of gravity (CG) rigs and extra weightsto simulate the CG and weight of spacesuits in reduced gravity.

"We're testing spacesuits for different levels ofgravity," Hadfield said. "We want to explore an asteroid, which isalmost no gravity. But, how do you control where you are if you can't grab ontoman-made handholds or have places to put your feet?"

Using the special rigs, the aquanauts can evaluate where thedistribution of weight should be for future spacesuit designs.

"We're finding that a center of gravity that iscompletely wrong on Earth ? one that would just give you a backache ? may helpyou with some of the tasks when you feel much lighter, when you don't have theweight of the Earth pulling you down," Hadfield said.

By operating and testing these developing technologies,NEEMO crewmembers will be able to provide information and valuable feedback toNASA engineers following the mission.

Life beneath the sea

The crew has also been performing life science experimentsthat are focused on human behavior, performance and physiology. The missionalso includes a study of autonomous crew work.

For instance, beginning in the second half of the mission,the crew simulated periods of limited communication between the crew and themission control center, much like what could potentially happen during missionsto themoon or Mars.

"For the second week, we simulated that we were so faraway that it takes 20 minutes when I send a message for it to arrive in yourear or your laptop," Hadfield said. "We call it autonomous operationsand it increases our level of isolation. It's the six of us with each otherwith only peripheral help from outside."

For Hadfield, the NEEMO mission represents an importantstepping stone at a crucial time in space exploration.

"We're just now at the point where we're starting topermanently leave the planet," he said. "We are forging the firststeps away from Earth. And it isn't easy. Every little step we take inexploration down here just opens up possibilities of human understanding, humanenrichment and human development of where we are in the universe."