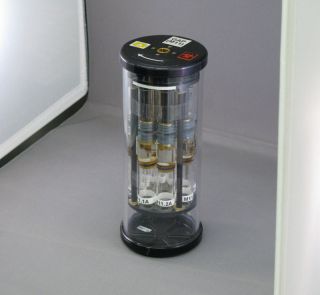 Bacteria are bound for space on NASA's space shuttle Atlantis during the STS-132 mission in May 2010.

Clustersof bacteria that are typically harmless on Earth can pose a health risk toastronauts when they find their way aboard space habitats. To combat that spacemicrobe menace, scientists plan to launch an army of the bacteria Friday aboardthe space shuttle Atlantis to test whether they can grow on novel new materialsspecially engineered to fight them.

Thetinyspace travelers will hitch a ride to space inside eight storage packs onAtlantis, each of which contains 128 vials. A similar control group of bacteriawill remain on Earth, so that scientists can compare how the two groups fare.

"Weknow that gravity plays a key role in the development of biological systems,but we don?t know exactly how a lackof gravity affects the development of bacteria and biofilms," said studyprincipal investigator Cynthia Collins, a chemical and biological engineer atRensselaer Polytechnic Institute in Troy, NY.

Spacebacteria can pose more than a health threat to astronauts. The microbes canaffect hardware too.

Inaddition to studying the bacteria growth, Collins and other researchers workingon the Micro-2 experiment also plan to test a newly developed antimicrobialsurface built by using nanotechnology.

?Usingdefense mechanisms found in nature, we have ?packaged? highly efficientbactericidal activity into functional surface coatings," saidco-investigator Jonathan Dordick, also of Rensselaer Polytechnic Institute."These surfaces do not cause toxic agents to be released, therebyproviding a surface that is safe to humans but effective in destroyingpathogenic bacteria."

Suchsurfaces might someday help prevent the formation or spread of bacteriain space and in hospitals.

Bacteriaclusters, known as biofilms, exist both inside and outside the human body.Scientists have discovered that they?re mostly harmless, even if some arerelated to disease.

Buttoughened biofilms that survive hostile environments such as hospitals ? orconfined locations like space shuttles ? can also become resistant toantibiotics. They might even become more potent just from living inmicrogravity.

Apast animal study showed that the Salmonella typhimurium bacteriaresponsible for food poisoning and typhoid fever can become three times moredangerous when exposed to the zero gravity environment of space.

"Thismeans while certain bacteria may be harmless on Earth, they could pose a healththreat to astronauts on the International Space Station or, one day, long spaceflights," Collins noted.

Atlantis'space mission ? slated to be the shuttle's last-ever spaceflight ? is onlyexpected to run about 12 days. The shuttle is due to launch Friday at 2:20 p.m.EDT (1820 GMT) from NASA's Kennedy Space Center in Florida and arrive at thespace station on Sunday.