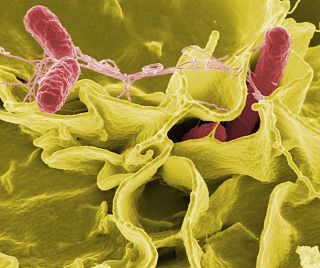 A germ thatcauses food poisoning and other illnesses can be three times more dangerous inspace than on the ground, an experiment has shown.

The findingspells out tougher challenges for astronauts taking trips to the moon or Mars,as recent work also hints that the body's immunesystem weakens during extended stays in space.

?Spaceflight alters cellular and physiological responses in astronauts including theimmune response,? said Cheryl Nickerson, a microbiologist at Arizona State University and leader of the experiment. ?However, relatively little was knownabout microbial changes to infectious disease risk in response to spaceflight.?

NASA?s STS-115space shuttle mission, launched in September 2006, carried Nickerson and hercolleague's Salmonella typhimurium bacterial experiment into space whileher group conducted an identical experiment on Earth. Their findings aredetailed in an upcoming issue of the Proceedings of the National Academy ofSciences.

Bacteriaexpress different sets of genes in different environments to ensure theirsurvival. Inhospitable conditions, for example, can turn on a "masterswitch" in some bacteria and allow the microbes to formtough spores that can survive the extreme conditions of space.

Prior toNickerson and her team's study, the genetic behavior of Salmonellatyphimurium--the main culprit in cases of food poisoning and typhoid fever--wasunknown. The microbe poses a significant threat to astronauts duringspaceflight, especially because it is resistant to many antibiotic treatments.

The researchers'experiment revealed that a genetic switch called "Hfq," which maycontrol more than 160 genes in S. typhimurium, turns on in spaceand causes S. typhimurium to become three times more virulentthan on the Earth's surface.

Based onwhat the space-faring bacteria did to animal models on the ground, Nickersonand her colleagues think hard-to-control biofilms are responsible for the increaseddanger.

"Biofilmsare associated with increased pathogenicity because the immune system can?tclear the bacteria effectively and antibiotics don?t treat them effectively,"Nickerson said. ?The change that we observed [in space] is consistent with whatlooks like formation of a biofilm. The ground-grown samples did not showbiofilm formation.?

To see howzero-gravity affected the bacteria, the researchers sent a specialgrowth chamber aboard the space shuttle Atlantis with the astronaut crew ofSTS-115.

Whenastronaut Heidemarie Stefanyshyn-Piper activated the experiment in space,Nickerson and her group started an identical version inside the orbitalsimulator at NASA's Kennedy Space Center. The simulator ensured that both setsof bacteria grew in the same conditions, aside from the difference ofzero-gravity.

"Thissimulator is linked in real-time to the shuttle and duplicates the exacttemperature, humidity and growth conditions of the shuttle, with the exceptionthat [it is] not flying in space,? Nickerson said. Both experiments"froze" the bacteria in place at the same time, allowing the researchersto see that Hfq was greatly activated by zero-gravity.

In spite ofthe microbe's increased danger to astronauts, Nickerson and her group thinks theHfq genetic regulator could be used to control food-borne disease caused by S.typhimurium--especially since no vaccine exists for it. The researchers planto conduct more investigations of disease-causing microbes in space to betterunderstand their risks and mechanisms during spaceflight.