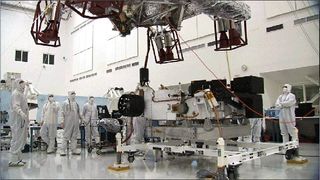 This image shows the Mars rover Curiosity being assembled in one of the Jet Propulsion Laboratory's 'clean rooms.' The team members are all dressed in special head-to-toe white suits.
(Image: © NASA/JPL-Caltech)

Scientists have long been concerned with the possibilitythat their search for any signs of life on Mars could be thrown off-course bywayward microorganisms from Earth that hitch a ride to the red planet onman-made spacecraft. But a new study suggests that fear may be less likely thanresearchers once thought.

While some bacteria could potentially survive the harsh tripthrough space, Mars atmospheric entry and landing, they would most likely diesoon after landingon Mars because of the planet's harsh atmosphere, the study found.

Ultimately it is unlikely such microorganisms will be able toreplicate once on the Martian surface, the research suggests.

"Without replication, terrestrial microorganisms arevery unlikely to contaminatea landing site," Andrew Schuerger, one of the study's researchers,told SPACE.com. "Thus, it is unlikely that spacecraft microbes willcompromise the search for organics or the search for life on Mars."

Mars has been one of the primary places that scientists haveexpanded their quest for extraterrestrial life, and while Curiosity is notintended to be a life-seeking mission, it is still important for a rover tohave minimal bacterial impact on the red planet.

NASA's next Mars mission ? the huge roverCuriosity ? is slated to launch in 2011. Protecting against microbialcontamination will be a vital part of that mission's preparation.

The new study was conducted by researchers at the Universityof Central Florida to examine whether two bacterial species commonto spacecraft could survive and replicate under simulated Mars-like conditions.

The week-long study observed the behavior of Escherichiacoli (E. coli) and Serratia liquefaciens (S. liquefaciens), two bacterialspecies that appeared to be tolerant of low pressures, under Martianconditions.

S. liquefaciens was found to be highly sensitive to thedesiccating, or drying, conditions prior to being introduced to the MarsSimulation Chamber, said Schuerger, and was therefore not included in the finalsimulation. On the other hand, E. coli was able to survive desiccatingconditions and Martian conditions for seven days within the confines of theexperiment, but was unable to grow or replicate.

But, could Mars already be contaminated from previousmissions to the red planet? The study's researchers say it is highlyunlikely.

"We really can't extrapolate a seven-day study tospeculate on the survival rates of what could already have made it to Mars; aprocess that is highly unlikely given the extremes of spacecraft assembly andinterplanetary travel," Bonnie J. Berry, one of the co-authors of thestudy, told SPACE.com.

In order for scientists to conclude that Mars iscontaminated, they would need data that demonstrates that microbes could firstbe dislodged from spacecraft and then could survive, grow and replicate on theplanet, said Schuerger.

"While a few microorganisms might still be attached tospacecraft components, if the microbes cannot grow and replicate, then theirspores will stay attached to the spacecraft and essentially not impact thepristine nature of the rest of Mars," Schuerger said. "So it might beaccurate to state that the immediate landing site on Mars does have a fewmicrobes associated with the spacecraft, but it would then be wrong to extrapolatethat point to the conclusion that Mars is contaminated."

In fact, there are already stringent policies and proceduralrequirements in place to protect against the biological or organiccontamination of Mars and other bodies in the solar system.

NASA's Planetary Protection Program aims to preventcross-contamination that could result from the space agency's explorationmissions by regulating how "clean" spacecraft have to be beforelaunch.

The program's standards vary, depending on the function ofthe spacecraft and the goals of the specific mission. In other words, landersand rovers are required to meet a different standard than orbiters.

Currently, NASA policy states that fewer than 300,000 viablemicrobial cells should be present on the entire spacecraft at the time oflaunch. For hardware that will also be impacting the surface of a celestialbody, the rule is more stringent ? there should be less than 500,000 cells inthose cases.

For comparison, a typical gram of soil contains between 1million and 100 million viable microbial cells, said Schuerger. So, the numberof spores allowed on the entire surface area of a spacecraft is roughlyequivalent to the number of microbes "found in less than 1/10th a gram ofsoil."

Standards for the Curiosityrover's mission go even further. The scientific instruments on the newrover are so sensitive that NASA also has to control for molecularcontamination.

"The scientific payload is so sensitive. There's a verystrict contamination control plan," Buxbaum told SPACE.com."Engineers are building the spacecraft in an extremely clean assemblyenvironment. They use very strict gowning and cleaning protocols, so regardlessof what the requirements are going in, the reality is that [Curiosity] is veryclean."

Buxbaum also agreed that the possibility that Mars isalready contaminated is doubtful, even though some microorganisms may have beenpreviously exposed to the Martian surface.

"There's been a certain amount of microbes that mayhave gotten to the Martian surface, but always in regions of the planetconsidered to be too dry, too cold, too exposed to ultraviolet radiation toallow for those microbial contaminants on Earth to multiply and spread,"Buxbaum said. "So, the short answer is: yes, terrestrial microbes havebeen on spacecraft that have gone to Mars. But, the rest of the answer is thatthat was done in compliance with a very conservative planetary protectionpolicy intended to protect Mars from potential harmful contamination."

In the future, scientists are hoping to develop methods tobe able to build spacecraft that have no threat of contamination, especiallyfor any upcoming life-detection missions

"It's important for exploration to any destination in thesolar system where we think we might encounter life ? so, if we found a warm,wet region of Mars, or missionsto Europa or Enceladus, for example ? that we come as close to absolutesterility as possible," Buxbaum said. "But right now, we currently donot build spacecraft that are compatible with an absolute sterilityrequirement."

In the meantime, scientists and the Planetary ProtectionProgram are doing what they can to control the threat of contamination prior tolaunch, while simultaneously developing ways to recognize and account formicroorganisms that are already known to originate on spacecraft.

The result is a microbial inventory that catalogues geneticmaterial taken from samples swabbed from the spacecraft and the room in whichit was built. So, if organic material is discovered in space, scientists canuse the inventory to compare the specimens with the DNA of the organisms thatwere present at the time of launch.

"This is our version of DNA forensics," Buxbaumsaid.