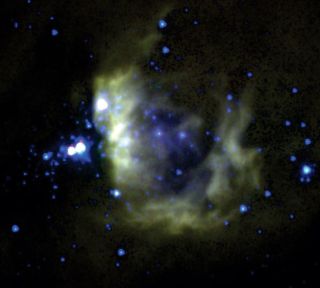 This mid-infrared image of the interstellar cloud BYF 73 from NASA's Spitzer Space Telescope reveals yellowish wisps to the right are remnants of gas that have been heated and are being driven off by the massive young stars within them (seen in blue). The large-scale collapse of colder gas to form a massive cluster is centered around the bright stars just to the left of the heated wisps. Full Story.
(Image: © NASA/JPL/CSIRO)

A vast interstellar cloud hasbeen caught in the act of building huge stars that would dwarf our own sun,giving scientists a tantalizing glimpse into how such massive stars form.

The cloud, called BYF 73, wasdiscovered using the CSIRO Mopra radio telescope in Australia. Made up mostly ofhydrogen and dust, the cloud sits about 8,000 light-years from Earth in theCarina constellation.

?At first glance, it is huge? stretching up to 4 light-years across ? but is collapsing in on itself at oneof the fastest speeds ever seen, astronomers said.

Some massivestars, more than 10 times the mass of the Earth's sun, have already beenspotted in the newfound cloud in follow-up observations by other telescopes.

But the new observations alsospotted something perhaps more significant: More matter is leftover in thecloud than in the giant new stars, suggesting that an entire cluster of massivestars is in the works.

?This means we have a veryrare chance to study the formation of an entire cluster from a very earlystage,? astronomer Peter Barnes, a study team member from the University ofFlorida, told SPACE.com.

The research, a collaborationof American and Australian astronomers, is detailed in a recent issue of the Monthly Notices of the RoyalAstronomical Society.

Astronomers have a goodhandle on how regular starsform, but the evolution of massive stars has proven hard to decipher becausethey can be difficult to find and observe.

Most tend to be located indeep space, more than 1,000 light-years away, in populations making up only afew percent of all stars,? Barnes said.

The interstellar cloud BYF 73is one of nearly 200 clouds observed during a survey that mapped such objectsacross our MilkyWay galaxy.

?With clouds like this we can test theories of massive starcluster formation in great detail,? said astronomer Stuart Ryder of theAnglo-Australian Observatory.?