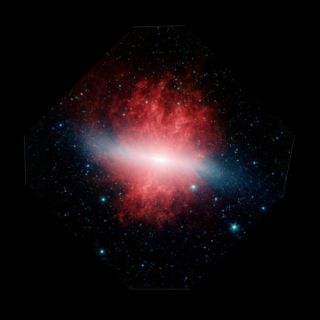 This image of the galaxy M82 was taken by NASA’s Spitzer Space Telescope. Scientists now think the galaxy is home to an oddity known as a micro-quasar.
(Image: © NASA/JPL/Caltech)

A strange and mysterious newobject in space may the brightest and long-lasting "micro-quasar"seen thus far, a miniature version of the brightest objects in the universe.

"The new object, whichappeared in May 2009, has left us scratching our heads — we've never seenanything quite like this before," said researcher Tom Muxlow, a radioastronomer at the University of Manchester's Jodrell Bank Observatory inEngland.

M82 is a "starburstgalaxy," one that churns out new stars at a prodigious rate. Most ofthese stars die in huge explosions, with supernovas occurring roughly every 20to 30 years in M82. However, the supernovas the researchers expect to seein that galaxy brighten at radio wavelengths over several weeks and then subsidein later months.

In comparison, the mystery objectturned on very rapidly within a few days and has shown no sign of dying down,even after nearly a year. "It's actually even brightened slightly,"Muxlow explained.

Quasarsare found in the center of galaxies and contain supermassive black holes.They are no more than a light year or two across but thousands of timesbrighter than our entire galaxy, which allows them to be seen more than 10billion light years away. Their energy is thought to emerge from matterspiraling at high speeds into the super-massive black holes theoretically atthe centers of most major galaxies.

However, this newfound object seemsto lie roughly 100 light years from M82's heart ? far enough away to make itunlikely it is linked with that galaxy's core.

"We think a massive blackhole must be involved, but we don't really understand how it's gettingfueled," Muxlow said.

To learn more about this enigma,"we have just started processing data from an array of 20 radio telescopesacross the Earth taken for the central nuclear region of M82," Muxlowexplained. "These images will allow us to examine the structure of the newradio source in detail. However, processing such huge datasets takessignificant amounts of computing effort and painstaking work. Only then will webe able to see if it is some rare form of micro-quasar. Watch this space!"

Such bright, enduringmicro-quasars might exist in our galaxy as well. "We might expect to seeone maybe once every 100 years," Muxlow conjectured.