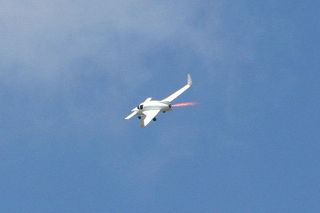 The Rocket Racing League, a competitive venture billed asNASCAR with rockets, is set to launch its 2010 World Exhibition Tour and debuta new X-racer rocket plane in a high-flying event.

The demonstration, set for April 24, is part of the plannedQuickTrip Air & Rocket Racing Show in Tulsa, Okla.

"For this to be successful, it really has to beenthralling for the crowd," said Peter Diamandis, co-founder of the RocketRacing League and founder of the X Prize Foundation, which offers cashprizes for technological feats. "Over the course of the next year, becausewe have the vehicles and the pilots, we're going to be trying different typesof competitions."

Beginning this year, the Rocket Racing League will conduct aseries of demonstrations at air shows across the country that will stretch into2011. The demonstrations are expected to highlight a mixture of staged trials, singlevehicles navigating the racecoursein the sky, as well as multiple aircraft competing head to head.

These exhibitions aim to build up the league's fanbase, inaddition to perfecting operations and technologies in preparation for thelaunch of the league in late 2011, Diamandis said.

The Rocket Racing League was founded in 2005 by X PRIZEfounder Peter Diamandis, and Granger Whitelaw, a two-time Indianapolis 500champion.

The league features rocket-poweredaircraft, called X-racers, flown by Top Gun and other acrobatic andmilitary pilots in closed-circuit and drag-style races that pit two to 10racers against each other on a 3-D raceway in the sky.

Unlike a regular jet engine that burns oxygen from theatmosphere as its oxidizer, X-racers carry their own oxidizer in the form ofliquid oxygen. The current Mark II and Mark III X-racer designs fly at speeds ofup to 300 miles per hour (483 kilometers per hour).

Have rocket, will race

The Tulsa air show will be the first public show thatdemonstrates the capabilities of the improved Mark III X-racer.

"One of the most significant things that we've beenable to do here is really bring down the cost of rocket operations,"Diamandis said. "The ability to operate a rocket-powered vehicle with aminimal crew is incredible, and the ability to do multiple operations per daywith the same rocket is really setting new records."

The Rocket Racing League's closed circuit races will involveX-racerpilots racing their vehicles through a custom 3-D virtual course, which isplanned to be a 4-lap, multiple elimination heat on a 5-mile Formula One-styleracecourse.

A cockpit-based Augmented Reality System will project theracecourse onto 3-D helmet displays. The new, custom-madehelmet, called the Targo Racer, will be debuted in an exhibition flight onApril 24.

At-home fans will also be able to experience Rocket Racingthrough remote and rocket-mounted cameras, that give the sensation of ridingalongside X-racer pilots.

The Rocket Racing League will be the headliner of April 24QuickTrip Air & Rocket Racing Show. The league will perform demonstrationsthroughout the day with the first beginning at noon.