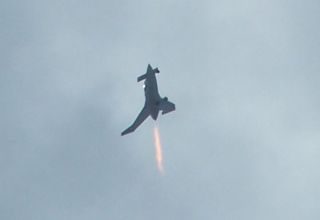 Rocket-powered racers received the go-ahead this week fromthe Federal Aviation Administration (FAA) to soar at over 20 venues across theUnited States.

This certification marks the first time ever that the FAAhas approved a production-scale rocket-powered aircraft for exhibitionflights, the Rocket Racing League announced on Tuesday.

The league formed in 2005 to promote aerial NASCAR-styleracing, and currently has a roster of six teams under title sponsor DKNY, a NewYork City-based men's sportswear line that is also backing the BridenstineRocket Racing Team headed by former U.S. Navy jet pilot Jim Bridenstine.

"I would like to personally thank the FAA for theirassistance through this process," said Granger Whitelaw, Rocket RacingLeague co-founderand CEO. "This historic moment was built upon the unprecedentedcooperation between our company, Armadillo Aerospace, and the FAA."

He added that the League plans to confirm its venues forthe 2009 exhibition season, before kicking off an officialrace season with 10 rocket racers in 2010.

League officials had once talked of pitting anXCOR-powered racer against an Armadillo-powered racer, but had to wait on theFAA approval for the Armadillo engine. However, the league announced inSeptember that its current fleet of rocket racers would only fly with Armadilloengines.

Whitelaw told SPACE.com then that XCOR engines hadnot met league standards of "safety, reliability, reusability andperformance," although XCOR disputes that its engines have any problems.

Of the 10 rocket racers scheduled to fly in 2010, six areslated to use the Armadillo engine. The other four racer engines remain"up for grabs," according to Whitelaw.

The league is currently working on selecting eight venuesfrom the more than 20 approved by the FAA, including the Reno NationalChampionship Air Races and Air Show in Reno, Nev., where a public demonstrationflight took place in September.