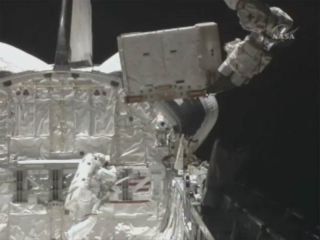 This view of NASA's shuttle Discovery shows STS-131 spacewalker Rick Mastracchio and an old ammonia coolant tank he and crewmate Clayton Anderson worked to install in the shuttle's payload bay for return to Earth on April 13, 2010.
(Image: © NASA TV)

HOUSTON- Two shuttle astronauts ventured outside the International Space Station (ISS)early Tuesday to complete work to install a massive new coolant tank during thethird and last spacewalk of their mission.

Discoveryastronauts Rick Mastracchio and Clayton Andersonfloated outside the station?s Quest airlock at 2:14 a.m. (0614 GMT) for theirlast 6 1/2-hour service call on the space station.

?Ohbaby, you?re going to want to take this one to the grandkids,? said Anderson,51, after taking one particularlypicturesque shot.

Itwas quick work for the spacewalkers, but Mission Control hit a snag whileactivating the new ammonia tank. A nitrogen valve appeared to be stuck, NASAofficials said.

Spacestation flight director Ron Spencer said the stuck nitrogen valve is more thanan annoyance. If Mission Control cannot free it remotely, space stationastronauts will likely have to replace the nitrogen component of the hulking, ammoniatank, which is the size of a large refrigerator.

Spencersaid that replacing the nitrogen assembly with a spacewalk is a last resortsince it could be a serious interruption to current shuttle mission, the spacestation crew and potentially NASA's next shuttle flight, which is slated tolaunch May 14. But if NASA does not fix the problem ? the valve itself can't bereached by spacewalkers, only its nitrogen system housing ? half of the spacestation's systems will have to be switched off.

"Wedo have a couple of tricks up our sleeves," Spencer said.

WhileMission Control wrangled with the stuck valve during the spacewalk, Mastracchio and Anderson tackled their own obstacle inspace. A stubborn bolt held up their work to install an empty ammonia tank (theone they replaced) in Discovery?s payload bay to be returned to Earth.

Boltshave been familiar foes for the astronauts, who have had to use pry bars andbrute strength to defeat them on twoearlier spacewalks. This bolt was misaligned, and it took both spacewalkersextra time to loosen another bolt, fix the misalignment andretighten everything back in place.

?Great job you guys,?said teacher-astronaut Dorothy ?Dottie? Metcalf-Lindenburger,who choreographed the spacewalk from inside Discovery. ?Now I can finally saygood job, we have the ammonia tank in the payload bay.?

Mastracchio and Anderson also had some trouble with thespace station?s airlock hatch at the start of their orbital work. But afterchecking the hatch?s handle (to make sure it was in place) they told MissionControl that all was well.

Thespacewalk was the sixth career spacewalk for both Mastracchioand Anderson, and the 143rd spacewalk dedicated to space station assembly sinceconstruction began in 1998.

Bothmen have about 38 1/2 hours of spacewalking work under their belts. In all,they spent 20 hours 16 minutes working outside Discovery and the space stationon this flight.

Tuesday?sspacewalk was also the last ever planned for the shuttle Discovery. When theshuttle next flies to the space station (a delivery mission slated forSeptember), there are no spacewalks planned. That September flight is expectedto be the last flight for Discovery and NASA?s final space shuttlemission.?

Acouple of hours into the spacewalk, Anderson noticed some wear on one of hisspacesuit gloves, but Mission Control said it was no problem unless the bottomlayers on the glove were cut.

?I?ve got 51-year-oldeyes but it doesn?t look like it?s cut,?Anderson said.

Anderson was unable to hitch a ride on the station?s Canadian-built robotic armto the European Space Agency?s Columbus laboratory to retrieve an experimentbecause time was short. Instead, he prepared some tools that would be needed onNASA?s next shuttle mission in May.

Mastracchio prepared an antenna for installation duringa future shuttle mission, before checking on a beam that was installed duringan earlier spacewalk that flight controllers have noticed wobbling. The astronautswere spacewalking on the 40th anniversary of the oxygen tank explosion thatcrippled the Apollo 13 mission in April 1970.

Thetwo spaceflyersmade sure to take time to enjoy their work in space, since it could be the lasttime they see a shuttle in space from the outside. The viewsof Earth from space were astounding, they said.

Discoveryblasted off last Monday and is in the midst of a 14-day flight to the InternationalSpace Station and due to land in Florida on April 19.

Themission is one of NASA?s last few shuttle missions before the fleet is retiredin September.  Only three more shuttle flights are scheduled after thisone.

NASA?sspace shuttle fleet is the only spacecraft currently flying that is largeenough to haul parts like the ammonia tanks, which are the size of largerefrigerators, to the International Space Station. Once the fleet is retiredlater this year, NASA will be dependent on Russia to ferry astronauts to andfrom the station until American commercial spacecraft become available.

PresidentBarack Obama is expected todiscuss the future of NASA?sspace exploration plan Thursday during a summit in Florida.