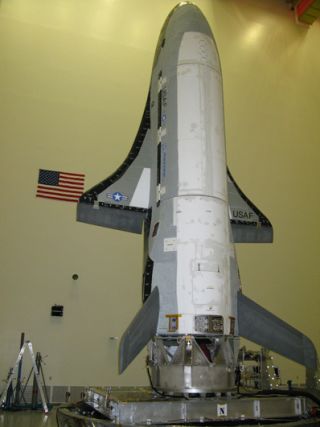 More than a decade after its conception inthe halls of NASA, and having snaked its way through multiple Pentagonbureaucracies, an unmanned military spaceplane is finally on the verge oflaunching on an unprecendented test flight.

A stubby-winged spaceship called the OrbitalTest Vehicle will fly into orbit on an Atlas 5 rocket, taking a round-tripshakedown voyage for the U.S. Air Force.

"What it offers that we have seldom hadis the ability to bring back payloads and experiments to examine how well theexperiments performed on-orbit," said Gary Payton, the undersecretary ofthe Air Force for space programs. "That's one new thing for us."

Liftoff should occur the evening of April 19in a launch window opening at 6:49 p.m. EDT and closing at 9:12 p.m. EDT,according to an Air Force spokesperson.

Several weeks or months later, the spacecraftwill drop into the atmosphere and glide to an automated landing at VandenbergAir Force Base, Calif.

The 11,000-pound spaceplane is morepopularly known as the X-37B, but its cost and ultimate objectives are topsecret.

NASA guided the project through its infancybefore funding dried up in 2004 and the agency handed over its X-37assets to the Defense Advanced Research Projects Agency. The Air Force tookover in 2006 after another programmatic shakeup.

The civilian space agency no longer has anyformal management role in the program, NASA but officials say the upcoming testflight provides an unparalleled opportunity to study how a small spaceplaneperforms during re-entry.

"We stay connected with the Air Force onthe thermal protection system, [and] on the guidance, navigation and autonomousre-entry and landing," said Daniel Dumbacher, the former X-37 projectmanager at NASA's Marshall Space Flight Center in Huntsville, Ala. "Westay in touch with them for data-sharing purposes, but that's the extent ofit."

Teams have been preparing the spacecraft atCape Canaveral since it arrived at the launch site in late February. The X-37Bwas built by Boeing Phantom Works in California.

After workers tow the rocket back inside thenearby Vertical Integration Facility, the X-37B space planewill be hoisted into place atop the booster's Centaur upper stage.

It is one-quarter the size of a space shuttleorbiter and can spend up to nine months in orbit, but the ship will be hiddeninside the Atlas rocket's payload fairing for liftoff.

The Atlas 5 will use a larger version of itsnose shroud to fit around the X-37B's nearly 15-foot-wide wingspan.

The Air Force isn't saying what equipment is stowedinside the space plane's unpressurized cargo hold, which is about the size of apickup truck bed.

"For new experimentalspace technologies, it gives us the ability to put them on-orbit,demonstrate whether they do or do not work, and then bring them back,"Payton said in an interview with Spaceflight Now last week.

Another likely application for the spaceshipcould be reconnaissance of war zones and foreign strategic sites, but launchesfrom Cape Canaveral can only reach low-inclination orbits, limiting thespacecraft's geographic coverage for such missions.

Others suggest the OTV might deploy andretrieve miniature satellites or rendezvous with another spacecraft todemonstrate orbital inspection and repair techniques.

The X-37B carries a large rocket enginemounted at the rear of the ship for significant orbit-changing and de-orbitmaneuvers, but the Air Force won't divulge its specifications.

The spokesperson declined to specify theorbital parameters for this month's mission.

The Air Force's plans for more X-37B missionsare up in the air. A second flight is on the books for 2011, but that launch'sfate is tied to the outcome of the inaugural mission, according to Payton.

"We're waitinguntil this first flight is over before we decide on the size of any potentialX-37 fleet," Payton said.

"If we're successful with this firstlaunch, I would love to see us proliferate the X-37 idea and marry it up withOperationally Responsive Space," Payton said.

"We could have an X-37 sitting atVandenberg or at the Cape, and on comparatively short notice, depending onwarfighter requirements, we could put a specific payload into the payload bay,launch it up on an Atlas or Delta, and then have it stay in orbit, do the jobfor the combatant commander, and come back home," Payton said. "And thenthe next flight, we could have a different payload inside, maybe even for adifferent combatant commander."

Since its establishment in 2007, the ORSprogram has flown tactical demonstration satellites and overhauled themilitary's space acquisition and development paradigm for small missions.

Although the X-37B is outfitted to spend upto 270 days in orbit, the first mission's length will hinge on accomplishingall of its goals.

"We'll have certain de-orbitopportunities just like the shuttle does," Payton said. "We aren'tmarried to any particular on-orbit duration right now."

After completing its mission, the29-foot-long spacecraft will fire its rocket engine to fall from orbit andglide to a precise touchdown on a runway at Vandenberg along California'sCentral Coast.

Vandenberg's 15,000-foot-long landing stripwas originally built for space shuttles returning from orbit. The OTV's debutmission will be the first time the concrete runway has been the landing pointfor a vehicle gliding back from space.

Edwards Air Force Base in the Mojave Desertof California is the spacecraft's backup landing site.

Despite rampant speculation on the AirForce's intentions for the X-37B, a major of the test flight is to verifythe space plane will actually work.

Payton said the foremost objective of theflight will be a technical demonstration of the spacecraft's design, fulfillingit's role an experimental X-vehicle.

One of the mission's more significanttechnological leaps will be the first attempted autonomous atmospheric entryand runway landing in the history of the U.S. space program.

The former Soviet Union accomplished the featwith the single automated test flight of its Buranspace shuttle in 1988.

The X-37B final approach will be guided by adifferential Global Positioning System precision landing system to feednavigation data into the craft's flight computer, giving the vehicle cues as itflies toward Vandenberg and lines up with the runway.

Like the space shuttle, the X-37B will soarthrough the upper atmosphere enduring scorching temperatures with the help of ashield of heat-resistant tiles.

Tiles made of high-temperature ceramicmaterial will protect the X-37B during the trip home.

The space plane will approach the landingsite and line up with the runway for a steep glide reaching speeds of nearly300 mph.

In the last few seconds of the flight, thecraft will flare its nose, deploy its tricycle landing gear and slap down onthe runway traveling well above 200 mph.

Dumbacher, now the director of Marshall'sengineering division, said the X-37 touches down at a higher velocity than theshuttle orbiter.

"From the outside, it looks a lot likethe shuttle," Payton said. "From the outer moldline, the hypersonicdrag [characteristics] and subsonic flight control system, it looks and acts alot like the shuttle."

But on the inside, the X-37B is a differentbreed.

Instead of running on fuel cells like theshuttle, the OTV will unfurl a small solar array to produce electricity inorbit. And the X-37B uses electromechanical actuators instead of hydraulics tomove its flight control surfaces.

The solar array gives the vehicle a renewableenergy source, permitting the X-37B to loiterin orbit for much longer than the space shuttle, which is limited tomissions lasting a few weeks.

Other technologies the OTV flight will testinclude advanced guidance, navigation and control, thermal protection systems,avionics, high temperature structures and seals, and conformal reusableinsulations, according to an Air Force fact sheet.

The Air Force manages the OTV project throughthe Rapid Capabilities Office, a top-level group reporting to a board of seniorbranch officials including the secretary of the Air Force, the Air Force chiefof staff, and the undersecretary of defense for acquisition, technology, andlogistics.

Many of the Rapid Capabilities Office'sprojects are implemented on accelerated timelines, the fact sheet said.

"The primaryreason for selecting X-37 was the need to have a demonstrator for thermalprotection systems and re-entry systems," Dumbacher said. "We can doarcjet testing and other things on the ground, but you never get the rightenvironment until you actually fly stuff back from orbit. The reason NASAstayed [with the X-37] as long as they did was because of the thermal protectionsystem technology demonstration aspect."

While the X-37 program was under NASAmanagement, engineers dropped an 85-percent scale model of the X-37 named theX-40A seven times from an Army Chinook helicopter. The approach and landingtests occurred in 2001.

In 2004, after NASA cancelled the OrbitalSpace Plane and started work on the Constellationprogram in the wake of the Columbia accident, the space agency transferredthe X-37 project to the DARPA.

The move instantly thrust the project into amurky middle ground somewhere between traditional white and black spaceprograms. Unlike purely classified programs, the government acknowledges theX-37's existence and openly discusses the vehicle's design, but officials giveonly vague answers on the purpose of its existence.

NASA had not started manufacturing aspaceworthy X-37 when its work was transitioned to DARPA. Engineers werefocusing on building a full-scale vehicle for drop tests.

The Air Force announced its intentions tofinish developing and building the X-37B in late 2006.

Throughout its checkered history, the X-37was supposed to launch on the space shuttle and a Delta 2 rocket. The Air Forceselected the Atlas 5 rocket in 2006.

The craft is the manifestation of the AirForce's long-held, on-and-off again dream to operate its own space plane.

The first time the military flirted with theidea of a reusable spaceship was the Dyna-Soarproject of the late 1950s and early 1960s. The Dyna-Soar, also named theX-20, was envisioned as a piloted spacecraft for anti-satellite, reconnaissanceand even space weapons applications.

After Dyna-Soar's cancellation in 1963, theAir Force turned its attention to an ill-fated manned space station called theManned Orbiting Laboratory. It was cancelled in 1969.

The military contributed to the earliestconceptual designs of the spaceshuttle beginning in 1971. The Air Force selected Vandenberg to hostshuttle launches on polar orbit missions with classified national securitypayloads.

But the Pentagon scrubbed plans to launch theshuttle from Vandenberg after the Challenger accident. The military's lastdedicated shuttle mission launched from Florida in 1992.

"There are a number of differencesbetween our shuttle experience and this bird," Payton said. "Our toppriority is getting the bird to orbit and getting it back down again."