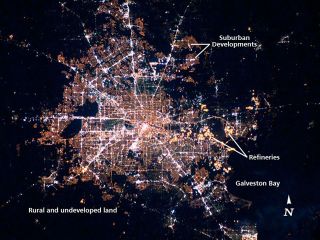 The Houston metropolitan area at night is featured in this image photographed by an Expedition 22 crew member on the International Space Station in early 2010, helping set a new record for most photos taken during a single space mission.
(Image: © NASA)

Astronauts — like many people — just can't get enough photosof Earth from space. But one dedicated space station crew has taken spacephotography to next level after shattering the all-time record for the mostpictures taken during a single spaceflight.

The recent Expedition 22 crew of the International SpaceStation snapped 100,000 images ofspace and the Earth from above over a roughly six-month period. The missionended earlier this month with a snowy landing in Kazakhstan, with a newcrew blasting off today for the orbiting laboratory.

Expedition 22 commander Jeff Williams of NASA, along with flightengineers Max Suraev and Oleg Kotov of the Russian Federal Space Agency,Timothy (T.J.) Creamer of NASA, and Soichi Noguchi of the Japanese AerospaceExploration Agency, made up the mission crew.

The photo-happy spaceflyers have brought the total number ofpictures taken from the space station to a grand sum of almost 639,000 images [moreviewsof Earth from space].

Williams broke his own previous record of 83,856 imagestaken during an ISS mission, set during his stint on Expedition 13 in 2006.

"This week we broke my old Exp. 13 record for number ofEarth photos," Williams wrote on Twitter from the station. "Later,after landing and recovery, I will post some of best." Williams writes as"Astro_Jeff" on the microblogging site.

The bulk of the astronauts' photography will be used inscientific research about the Earth's climate and resources and how those arechanging over time. NASA has been amassing data of Earth seen from space sincethe Gemini missions in the 1960s.

And the viewsfrom the space station recently improved. In February, the STS-130 flightof the space shuttle Endeavour delivered the largest window ever flown on aspacecraft to the station. Called the cupola, the see-through dome offers awide-angle view of space outside the orbiting laboratory from seven windows ofhigh-optical-quality glass.

When the space shuttle Discovery visits the station thismonth, it will deliver a new facility to take advantage of the cupola forremote sensing and high-resolution Earth observation photography. Theapparatus, called the Window Observational Research Facility (WORF), is due tobe launched on Discovery and her seven-member crew, on April 5.

Williams and Suraev recentlylanded aboard a Russian Soyuz spacecraft on the steppes of Kazakhstan March18. Meanwhile, Kotov has taken over the station helm as Expedition 23commander, with Noguchi and Creamer staying on as Expedition 23 flightengineers.

That Soyuz TMA-18 spacecraft is slated to arrive at thespace station on April 4, one day before Discovery is due to launch toward theorbiting laboratory.

Liftoff of Discovery is currently scheduled for 6:21 a.m.EDT (1021 GMT) on Monday morning, with favorable weather conditions expectedfor the launch, mission managers have said.