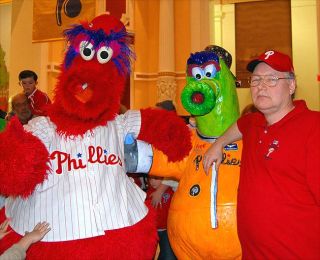 ThePhiladelphia Phillies' fuzzy-green mascot "Phillie Phanatic"received a NASA makeover this week, thanks to the artistic efforts of aspace enthusiast.

Professionally-trained artist Cliff Lentz, who for years has served as the"unofficial NASA correspondent" for a localPhiladelphia sports-radio morning show, was selected with 19 otherartists to decorate 20 six-foot tall statues of the baseballteam's mascot as part of their "Phanatic AroundTown" public art program.

The artists were given a month to decorate their fiberglass Phanaticand an aluminum home plate-shaped base. For Lentz, the theme forhis statue, dubbed "P. Phanatic Star Voyager" was obvious.

"Since I live in the Philadelphia area and, as you know, I'm ahuge space fan, I wanted to make something of a statement aboutspaceflight," wrote Lentz in an e-mail to collectSPACE.com,where he's been registered as a member since 2002. "My design is atribute to the Americanspace program with a sort of whimsical look."

"With five sides I decided to do scenes from Mercury, Gemini,Apollo, shuttle and an 'Earth to the Moon' panel for the front," hedescribed. "I couldn't resist adding the iconic footprint on themoon and the personal photo of the Phanatic's mom like Charlie Duke'sfamily photo [that he left on the moon] on Apollo 16."

Given its size ("The Phanatic has a 46-inch wing span!"), Lentzpainted the statue in a tool shed in his backyard.

"We were hit with a huge snow storm and two days later, a secondone," Lentz wrote as the project got under way. "Clearly I have[had] some obstacles."

Weather did not however, scrub Lentz's statue launch. His Phanatic, alongwith the other 19, were unveiled before an audience ofthousands at the Please Touch Museum on Monday.<

Lentz was glad to use his statue to share his passion forspace exploration, especially with the next generation.

"The Phillies chose visiting children to help each artist unveileach statue and then the photo frenzy started. In the midst of all this Iwas still talking spacehistory to as many visitors as I could reach. I passed out about 100space cards to the children who came by," said Lentz.

The statues remained on public display at the museum on Tuesday, beforebeing moved to their destinations at local attractionsthroughout Philadelphia, including the Franklin Institute and the ComcastCenter.

"On Wednesday, my statue will be moved to the Main Branch ofthe Philadelphia Library where it will remain until August,"commented Lentz.

After the 2010 baseball season, the Phanatic statues will be auctioned offby the Phillies, with net proceeds going to Phillies Charities.

The "Phanatic Around Town" marks the first time a Major Leaguemascot has been used for a public arts project.