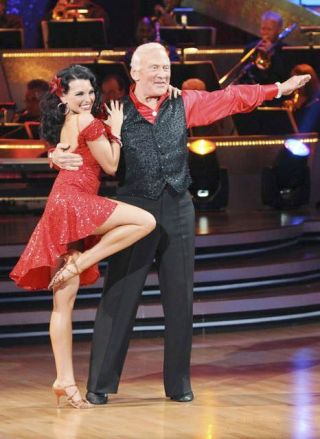 Buzz Aldrin and Ashly Costa strike a pose as they complete their first live routine on "Dancing with the Stars" on March 22, 2010.
(Image: © ABC)

Former astronaut Buzz Aldrin may have helped ?DancingWith the Stars? nab its highest ever debut ratings with Monday night?s liveseason opener, but it still pales comparison with NASA?s broadcast of the firstmanned moon landing ? which also co-starred the Apollo 11 moonwalker. ?

The TVdance competition averaged about 23.9 million total viewersMonday night during its two-hour season premiere ? the show's best debut yet ?making it ABC?s second most-watched show ever for its timeslot behind the 2001Rose Bowl, according to overnight Nielsen ratings reported by Media LifeMagazine.

But that number is dwarfed by the estimated 500 millionpeople around the world who watched Aldrin and fellow Apollo 11 astronaut NeilArmstrong land and walk on the moon during their July 1969 mission.

Like ?Dancingwith the Stars,? the Apollo 11 mission also had a recorddebut. About 1 million people were estimated to watch the astronauts blast offatop a massive Saturn V rocket on July 16, 1969. At the time, it was themost-watched launch in NASA history, the space agency said.

?In the 8-day mission, the TV networks beamed abroad, viasatellite, telecasts totaling 230 hours,? a NASA account of the Apollo 11mission has stated.

Aldrin and Armstrong flew to the moon with crewmateMichael Collins, who remained in lunar orbit aboard the command module Columbiaduring the historic first moon landing. [Aldrinon the moon]

But whether the 80-year-old Aldrin will stay in therunning that long is up to his performance and the whim of AmericanTV audiences. He is teamed up with professional dancer AshlyCosta, though their first cha-cha received the lowest score of the night fromthe show?s judges.

"My primary motivation for joining the show is tohelp bring NASA and the U.S. human spaceflight program to the front of popularconsciousness,? Aldrin said in NASA statement released today. "?Dancingwith the Stars? has an audience of millions of followers and it would be greatif those viewers became supporters of our space program. I?m hoping that all ofmy old friends and colleagues in the space community can tune in and cast theirvote for the octogenarian on the dance floor!"