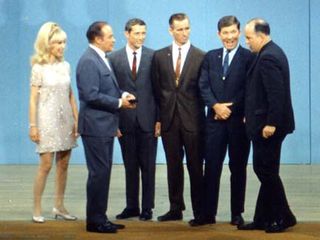 A Bob Hope TV special with "I Dream of Jeannie" star, Barbara Eden, and the crew of Apollo 7.
(Image: © Roger Launius)

Astronautswho set out to one day travel among the stars have sometimes – like famedmoonwalker Buzz Aldrin – become stars in their own right on Earth.

Theappearances of NASA astronauts on TV talk shows, reality shows and sciencefiction dramas reflect not just changes in the astronaut corps, but also adynamic media landscape with more public outlets than ever.

Evenlong-retired astronauts pop up in television and other appearances over theyears. Aldrin, the 80-year-old veteran of the first moon landing by Apollo 11,is set to compete in the new season of the TV show "Dancingwith the Stars,” which starts on Monday.

"Theone thing you can say about him is that he's been in there every day pitchingand trying to share spaceflight with the public," said Roger Launius,space history curator at the Smithsonian's National Air and Space Museum, ofAldrin. "He doesn't stop. He could if he wanted."

Aldrin'swillingness to make such appearances may not represent the norm for everyone inthe astronaut corps. But plenty of other current and former astronauts havealso shared the public spotlight on late night talk shows, reality TV showssuch as "Survivor," home improvement shows and even on Comedy Central.

Publicperception of astronautsand NASA has almost certainly changed over the years, but not necessarilybecause the American public of 50 years ago was inherently more curious aboutastronauts.

"Peoplelike to look back lovingly on the 1960s and talk about how engaged the publicwas, but I'm not sure that was true," Launius told SPACE.com.

The numberof American space explorers has also ballooned since the early days of NASA, fromthe first seven Mercury astronauts to now more than 150 astronauts. That plusmore astronauts flying in space has perhaps made it more difficult forindividual faces to stick in the minds of the public.

Newastronauts also face a much more fragmented audience that has split itsattention between new media on the Internet and hundreds of TV channels nowavailable via cable and satellite.

But thebigger pool of astronaut candidates has also provided an upside, Launius said.Many more astronauts come from science, engineering and other backgroundsrather than just the military, and so more of them may feel comfortable beingin the limelight in the first place.

GarrettRiesman, a NASA astronaut and flight engineer who spent time living and workingaboard the International Space Station from 2008-2009, made a live appearancevia satellite from the space station on Comedy Central's "Colbert Report."He spent the interview casually cracking jokes with comedian Stephen Colbert,despite a transmission lag.

AstronautSunita Williams also appeared on the show in 2009 to break the news that NASAdid not name a space station room after the comedian despite the fact that hewon an online poll. NASA named the room Tranquility, after Aldrin’sApollo 11 moon base with crewmate Neil Armstrong. The agency named a treadmillafter Colbert.

Riesman alsomade a cameo as a space marine during the final episode of the sci-fi TV drama"BattlestarGalactica," though the scene may not have made the final cut. Fellowastronauts Michael Fincke and Terry Virts had an appearance during the finalepisode of "Star Trek: Enterprise." Fincke even got a line or two in withEnterprise captain Jonathan Archer (actor Scott Bakula).

Still, famefor fame's sake does not drive most astronauts, according to astronaut DavidWolf. He also serves as chief of the Astronaut Office Extravehicular Activity(EVA) Branch.

"It'snot a particular agenda of NASA or the astronauts to make the astronautspopular," Wolf said. "We want to communicate value of the [space]program and the experiences."

The pointof it all

Wolf hasspaceflight experience that includes a stay aboard the now-defunct Russian Mirspace station and multiple space shuttle flights, but he has also found time toshare his experiences in the media.

TheIndianapolis-born astronaut has made many appearances on local Indiana TVstations, and is a regular guest on "The Bob and Tom Show," anationally-syndicated radio show. He also spent time in space helping to answerYouTube video questions, posted mainly by children and teens, during a spaceshuttle Endeavour mission in July 2009.

The payoffmay come in the end from inspiring not just the public, but also a newgeneration of astronauts. Wolf recalled being a young boy and watchingastronauts talk about spaceflight with famed news commentator Walter Cronkiteon a black-and-white TV.

"Iwould listen to the astronauts and listen to every word," Wolf said."I knew that I could do that, and I wanted to do that."