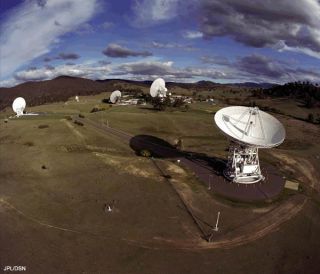 View of the Canberra Complex showing the 70m (230 ft.) antenna and the 34m (110 ft.) antennas. The Canberra Deep Space Communications Complex, located outside Canberra, Australia, is one of the three complexes which comprise NASA's Deep Space Network. The other complexes are located in Goldstone, California, and Madrid, Spain.
(Image: © NASA.)

Rovers and deep space probes can forget about quickly postingcool high-definition videos to YouTube, given the painfully slow data transferrates for most of today's space missions.

But NASA wants to change that by fusing together three agedspacecommunication networks into a much faster, more efficient data networkworthy of 21st century missions to the moon, Mars and beyond. And it hopes todo it all without costing taxpayers an extra cent.

NASA's overhaul aims to boost space communication by asmuch as 50 times faster than today's data transfer rates, so that a Marsmission squeaking by on a few megabits per second might someday get as much as600 megabits per second, if not more. That could enable far more scientificpayoff per mission in the long run.

"Imagine what you can accomplish with a singlemission instead of several spacecraft flying over several years to collect thedata," said Badri Younes, NASA's deputy associate administrator for SpaceCommunications and Navigation.

An upgraded network might support the very quick uploador download of huge video files the size of an HD YouTube video, as opposed tocurrent capabilities that would struggle to transfer mp3 music files.

Younes worked at NASA's Goddard Space Flight Center for adecade before leaving to join the U.S. Department of Defense. But the U.S.space agency hired him back in August 2007 for the purpose of revolutionizingits space communication networks.

From Chevy to Lamborghini

Younes faces the tricky task of creating a new spacecommunication network out of NASA systems that have not had upgrades since theearly 1990s. He also must ensure that the rebuilding period does not interferewith NASA's support of ongoing space missions, ranging from the InternationalSpace Station to Mars orbiters.

"It's like driving a 1960s Chevy that's beat up andlosing paint while going at 90 mph, and being pushed to convert that into aLamborghini while driving 90 mph without losing a beat," Younes told SPACE.com.

In the past, NASA has cobbled together its spacecommunication networks based on the demands of each new space mission. But thatpiecemeal approach has limited the technological upgrades, because each missionhad to pay out of its own pocket.

By doing a wholesale upgrade of a unified spacecommunication network, Younes can offer mission managers capabilities that theywould otherwise have never dreamed of. He has already targeted 2018 as the latestdate for integrating the three existing space networks.

Lasers point to the future

The U.S. space agency is already pushing newcommunication innovations such as disruption tolerant networking. The NASA-developedInternet protocol ensures that communication delays or disruptions from solarstorms won't disrupt the flow of data packets across space networks, and hasundergone testing in near-Earth as well as deep-space missions.

But one of the biggest communication revolutions willcome from laser-driven optical communication, as opposed to current spacecommunications based on radio frequencies. Lasers could allow data transferspeeds of up to 600 megabits per second, as Younes hopes, or perhaps evenspeeds surpassing 1 gigabit per second (1 gigabit = 1024 megabits) from themoon or Mars. That data stream could be even higher for a near-Earth spacecraftor outpost such as the space station.

NASA has already enlisted the help of MIT to build and demoa laser communications system aboard the Lunar Atmosphere and Dust EnvironmentExplorer, slated for launch in late 2011. A successful test would go a long waytoward ensuring that NASA's Constellation astronauts returning to the moonhave a much faster connection to Earth.

"You have to start with the premise that anythingyou do in life can always be optimized," Younes said.