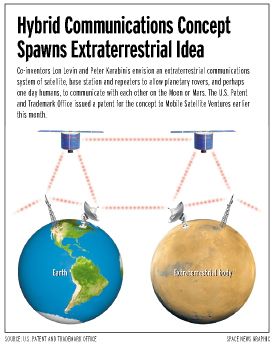 WASHINGTON- When Mobile Satellite Ventures was issued the first-ever U.S. FederalCommunications Commission license in 2003 for its concept of creating hybridsatellite and ground-based communications systems, the company already had beenworking on a slew of related inventions it planned to capitalize on.

So far, 25of about 100 inventions have been approved by the U.S. Patent and TrademarkOffice, the most recent of which includes a hybrid communications system formultiple rovers - or eventually humans - exploringthe Moon or Mars.

The mostfar-reaching of the innovations is a concept for establishing an extraterrestrialcommunications system that, among a variety of scenarios, envisionsa satellite orbiting another planet, a base station on that planet andrepeaters to relay data to different points on the planet or back to thesatellite. That extraterrestrial network also would be able to communicate withEarth-based ground stations and a satellite orbiting Earth.

Lon Levin,co-inventor, with Karabinis, of the extraterrestrial communications concept,said the idea was hatched in 2004 after a visit to NASA and a discussion aboutthe Spiritand Opportunity rovers that landed on Mars in January that year.

?When wegot back to the office, we imagined a future architecture that would enablecommunications as we expanded our presence on a planet,? said Levin, then asenior officer with Mobile Satellite Ventures who also had co-founded XMSatellite Radio. ?This architecture would not only provide efficientlyexpandable communications on the surface of a planet, it would also provide anefficient and effective means to have many simultaneous communications betweenEarth and other planets.?

Karabinisand Levin applied for the patent in April 2004.

Karabinisacknowledges the concept is futuristic and not likely to materialize anytimesoon, but he said parts of the innovation might be applied sooner toEarth-based communications. Mobile Satellite Ventures is seeking to expand theextraterrestrial communications patent to Earth-based systems, a process likelyto take two years, he said.

One exampleis their concept for an extraterrestrial communications system that would havethe ability to sense what frequencies other nearby ATC components are using inorder to avoid interference. These adjustments currently are done manually inEarth-based communications systems.

?With thesetweaks that we incorporate into the space-based mutation, if you will, of theATC, it is now becoming apparent - after the fact - that they may haveterrestrial value as well,? Karabinis said.

MobileSatellite Ventures received two other patents in October, one for a signalprocessing algorithm that will reduce the processing time for GPS positionlocation, whether or not ATC is involved, and another for the technique used inthe handover from satellite to a terrestrial receiver without interruption tothe user.

?A key toour future in space is creating a commercially sustainable economy in space,?Levin said. ?By allowing patents such as ours, the United States is takinganother step toward that goal. I hope more will follow.?