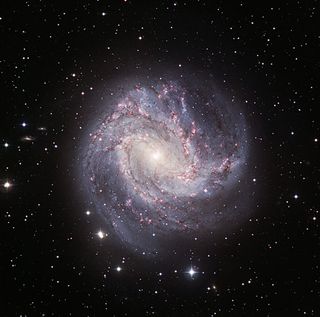 ESO's Wide Field Imager has captured the intricate swirls of the spiral galaxy Messier 83, a smaller look-alike of our own Milky Way. Shining with the light of billions of stars and the ruby red glow of hydrogen gas, it is a beautiful example of a barred spiral galaxy, whose shape has led to it being nicknamed the Southern Pinwheel.
(Image: © ESO)

Galaxies come in many shapes and sizes, but until recentlyastronomers have been at a loss to explain why.

Now scientists have used dark matter theory to predict themenagerie of galaxiesfound in the universe. Their new model reproduces 13 billion years? worth ofcosmic evolution, resulting in a surprisingly accurate tally of the differentkinds of galaxies we see.

"We were completely astonished that our model predictedboth the abundance and diversity of galaxy types so precisely," saidresearcher Nick Devereux of Embry-Riddle University in Arizona.

Elliptical galaxies look like eggs of light ? a central,solid nest of stars. Spirals, on the other hand, are the stereotypical swirlinggalaxies that many people think of, and include our own Milky Way and ourclosest neighbor, Andromeda. Spiralgalaxies come in two kinds ? with and without a bar of thick material inthe center, from which the spiral arms wind out. (The Milky Way is a barredspiral.)

Researchers created a new supercomputer model, based onobservational data and the "Lambda Cold Dark Matter" theory of theuniverse. This theory suggests that about 72 percent of the cosmos is made ofup a mysterious force called dark energy, while another 23 percent is composedof an invisible type of matter called dark matter. That leaves only 4 percentof the universe made of normal, visible matter, including all the stars andplanets that we see.

The new supercomputer model was able to predict roughly theright relative numbers of spirals and ellipticals that exist today.

"It really boosts my confidence in the model,"said astronomer Andrew Benson of Caltech, a co-researcher in the study.

The researchers said the inclusion of dark matter is likelycrucial to their results, because theory predicts that galaxies sit insidelarger spheres, called halos, of the invisible stuff. The behavior of agalaxy's darkmatter halo could affect its evolution and help determine whether itbecomes a spiral or an elliptical, they added.

"These new findings set a clear direction for futureresearch," Devereux said. "Our goal now is to compare the modelpredictions with observations of more distant galaxies seen in images obtainedwith the Hubble [Space Telescope] and those of the soon-to-be-launched JamesWebb Space Telescope."

The findings were published in the journal Monthly Noticesof the Royal Astronomical Society.