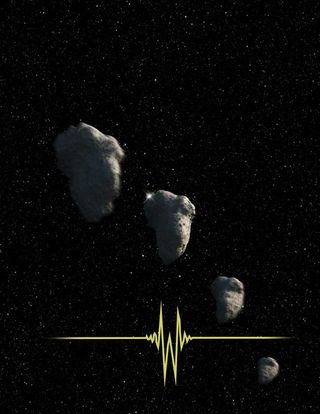 This is an artist's impression of a small Kuiper Belt Object (KBO) occulting a star. NASA's Hubble Space Telescope recorded this brief event and allowed astronomers to determine that the KBO was only one-half of a mile across, setting a new record for the smallest object ever seen in the Kuiper Belt.
(Image: © NASA, ESA, and G. Bacon (STScI))

In a cosmic version of the old needle-in-a-haystack finding, astronomers have spotted an object less than a mile wide that is 4.2 billion miles away, in the outer solar system.

The object is part of the Kuiper Belt, a ring of icy rocks beyond Neptune.

The object, spotted in visible light by the Hubble Space Telescope, is about 3,200 feet (975 meters) across. Previously, the smallest object seen via reflected visible light in the Kuiper Belt was 30 miles wide.

The discovery, though small, is the first observational evidence for a population of comet-sized bodies in the Kuiper Belt that are being ground down through collisions, astronomers said. The Kuiper Belt is therefore collisionally evolving, meaning that the region's icy content has been modified over the past 4.5 billion years, since the solar system was born.

Interestingly, the object is actually 100 times dimmer than Hubble can see directly. So the discovery was made by using a trick of light.

Hilke Schlichting of the California Institute of Technology in Pasadena, Calif., and her collaborators figured that the instruments ought to detect any object passing in front of a star, should such an occultation occur. So they collected 12,000 hours worth of such Hubble data — covering 50,000 stars — that focused on the main plane of the solar system, where the Kuiper Belt objects should be.

Schlichting and her team found a single 0.3-second-long occultation event. They assumed the KBO was in a circular orbit around the sun and inclined 14 degrees to the ecliptic — the main plane of the solar system in which planets orbit. The object's distance was estimated from the duration of the occultation, and the amount of dimming was used to calculate the size of the object.

The discovery was announced in the Dec. 17 issue of the journal Nature.

Other observations, including some by Hubble, have shown that other stars are encircled by disks of debris that are also the leftovers of planet formation, as is the case with our Kuiper Belt, where some objects are as large as Pluto. Over billions of years, debris in the disks should collide, and grind bigger objects down to smaller pieces, as has now been detected.