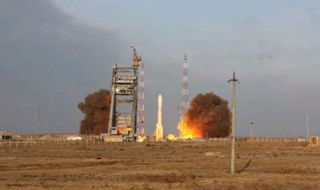 The Glonass spacecraft launched at 1038GMT (5:38 a.m. EST) from the Baikonur Cosmodrome in central Kazakhstan. The silver and white launcher, propelled by hydrazine fuel, ignited and quicklyroared away from the space center on the power of six main engines.

Two burns of the Block DMupper stage were planned to put the satellites in a circular orbit 12,000 mileshigh with an inclination of 64.8 degrees. The Glonass payloads were deployedshortly after 1400 GMT (9 a.m. EST).

The Russian Space Agencysaid the upper stage released the satellites into the expected orbit.

Monday's launch was the350th flight of the workhorse Proton rocket. Thebooster was originally conceived as a vehicle to heave massive nuclear bombs todistant targets, but the Proton's mission was changed to a satellite launcherin the 1960s.

Since debuting in 1965,Proton variants have launched military and commercial satellites,interplanetary probes and modules for manned space stations.

Each of the 3,000-poundGlonass satellites is designed to last seven years broadcasting navigationsignals to Russian military and civilian users.

The Glonasssystem is Russia's counterpart to the U.S. GlobalPositioning System. Glonass data are used around the world to determineusers' coordinates, velocity and precise time.

The fleet has been stymiedby underfunding and delays throughout its 27-year history, its coveragedeclining as Russia suffered from economic ruin following the collapse of the Soviet Union.

The Russian government haspledged more money for the program in recent years in an attempt to rejuvenatethe satellite constellation to provide continuous global coverage.

Today's Glonass systemincludes 19 satellites, but one of those is about to be decommissioned and twomore are out of service for maintenance, according to an update posted thisweek on the Russian Space Agency's Web site.

Glonass spacecraft arepositioned in three planes, each designed with eight satellites to provideworldwide coverage. But only one of the three orbital planes currently containseight spacecraft, according to the Russian Space Agency.

Russia planned to launch six Glonasssatellites in two launches this year, but a mission in September was postponeddue to technical issues. The next Glonass launch is now scheduled for February.