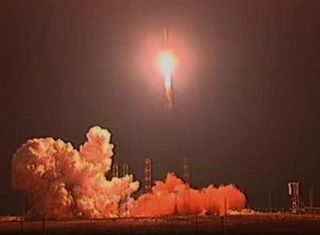 The first stage drained itskerosene and liquid oxygen propellants two-and-a-half minutes after launch,giving way to the Zenit's second stage to continue the push toward space. Thepayload fairing jettisoned on time five minutes into the mission and the secondstage separated from the rocket's Block DM-SLB upper stage eight-and-a-half minutesafter launch.

The kerosene-fueled upperstage ignited for three-and-a-half minutes to push the Intelsat 15 satelliteinto a low-altitude parking orbit.

A ground station acquiredthe first signals from Intelsat 15 a few minutes later, according to SeaLaunch.

"I want tocongratulate Intelsat and Orbital for a very successful mission," saidKjell Karlsen, president and general manager of Sea Launch. "This is the10th satellite we've orbited for Intelsat and we look forward to launching manymore satellites for you in the future."

Intelsat 15 will nextunfurl its power-generating solar arrays and fire its on-board propulsionsystem to reach a circular geosynchronous orbit over the equator 22,300 milesabove Earth. The spacecraft will also deploy two 7.5-foot antenna reflectors inthe next couple of weeks.

After in-orbit testing, thesatellite will begin operations from a slot at 85 degrees east longitude, whereit will replace the Intelsat 709 spacecraft launched in 1996.

Intelsat 15 will providedata and video communications services to Russia, the Middle East, and IndianOcean regions for up to 17 years.

The satellite's 22 Ku-bandtransponders will be attached to two communications beams focused on the MiddleEast and Russia. The coverage zone stretches from North Africa and easternEurope to Siberia.

Intelsat plans to launchanother satellite on Land Launch in 2011.

"Our relationship withSea Launch is testament to our desire for maintaining a robust launcherindustry, and today's mission marks the fourth success on their Land Launchsystem. I want to thank everyone who worked diligently to ensure a flawlessmission for Intelsat 15. We look forward to our next Land Launch mission thatis slated to carry our Intelsat 18 satellite into orbit in 2011," said KenLee, Intelsat's senior vice president of space systems.

Sea Launch has securedearly financing to continue operations and plans to emerge from bankruptcyearly next year. The ocean-based Zenit 3SL rocket could return to flight with apayload for Eutelsat by the end of 2010, according to company officials.