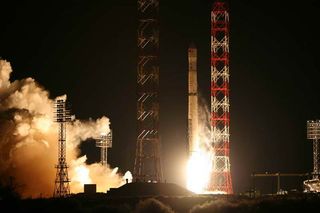 A Malaysian communicationssatellite successfully journeyed to orbit Sunday after spending nearly an extrayear on the ground for repairs to damage caused by a launch site crane accidentlast August.

A Land Launch Zenit 3SLBrocket lifted off at 2150 GMT (5:50 p.m. EDT) from Complex 45 at the BaikonurCosmodrome in Kazakhstan. The first phase of the launch was successful, placingthe launcher's upper stage and the MEASAT 3a satellite in a temporary parking orbitabout 12 minutes after liftoff, according to the launch provider.

Two more burns of the BlockDM-SLB upper stage occurred as planned overnight to deliver the 5,216-poundspacecraft to a geosynchronous transfer orbit spanning from a low point of7,220 miles to a high point of more than 22,000 miles. The targeted inclinationis 10.63 degrees.

"Congratulations to MEASATand to Orbital, and to the entire Land Launch team for successfully completingthis mission," said Kjell Karlsen, president and general manager of SeaLaunch. "This accomplishment represents the work of Space InternationalServices, based in Moscow, and its collaboration with the Sea Launchpartnership."

The launch was delayed fromlast August after a crane struckthe spacecraft during final launch site processing at Baikonur.

MEASAT 3a was shipped backto the United States so its builder, Orbital Sciences Corp., could repair thesatellite and ensure its systems were ready for flight.

The craft will bepositioned in geostationary orbit at 91.5 degrees East Longitude. It carries 12Ku-band for direct-to-home television broadcasting to Malaysia and Indonesiaand 12 C-band transponders for services across the Asia Pacific, the MiddleEast, Africa, Europe and Australia.

"We would like tothank the entire Land Launch team, as well as those of Orbital and MEASAT, fortheir hard work and dedication which has led to the successful launch of theMEASAT 3a satellite today. On the completion of in-orbit testing, MEASAT 3awill provide a significant boost to our network capacity, allowing thecontinued expansion of our business across the wider Asia Pacific region,"said Paul Brown-Kenyon, COO, MEASAT.