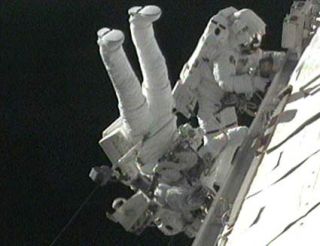 The spacewalkers, STS-129 mission specialists Robert"Bobby" Satcher, Jr. and RandyBresnik, got a late start this morning after dealing with an issue onSatcher's pressurized spacesuit. The valve on his drink bag, which allows himto sip water during the spacewalk, came loose and the astronauts had to replaceit. The fix caused a delay, and the spacewalkers officially began the excursionat 8:24 a.m. EST (1324 GMT), about an hour behind schedule.

Once outside the station, Satcher and Bresnik quickly madeup for lost time, and managed to accomplish all of their planned tasks andstill finish just shortly after the original planned ending time, at 2:06 p.m.EST (1906 GMT).

The spacewalk was the second for both Satcher and Bresnik,who are each making their first spaceflights on this mission. The two launchedNov. 16 on an 11-day trip to deliver about 15 tons of spare supplies to theorbiting laboratory.

Bresnik recently becamethe father of a baby daughter Abigail, who was born to his wife Rebeccaback in Houston on Saturday.

"I got to see [via video] my little girl for the firsttime yesterday," Bresnik said at the end of his spacewalk. "Thank youto my wonderful wife for bringing her into the world. That is the mostbeautiful thing I've seen since I left Earth."

The couple already has a son, Wyatt, who is three years old.

"Hey, Wyatt, I look just like Spiderman," Bresnikcalled while climbing across the space station's railing today to attach ascience experiment.

The equipment is a test to see how materials, including a newtype of Teflon, hold up to the ultraviolet radiation, atomic oxygen, andextreme temperatures of space.

In addition to that project, the spacewalkers installed anew oxygen gas tank on the station's Quest airlock that will be used to helppressurize and depressurize the compartment where astronauts enter and exit forspacewalks. After that work was done, the two astronauts even had time to takeon some other "get-ahead" chores at the station.

"You guys are working great together out there,"said mission specialist Mike Foreman, who was helping coordinate the excursionfrom inside the space station.

"We've got a good big team with you and everybody elseon the ground too," Bresnik replied.

At one point, things were going so smoothly the astronautsstopped to wish for lunch.

"I don't know about you Bobby, but if we happen to passa burger joint in the next few thousand miles, I wouldn't mind stopping andgetting something to drag up," Bresnik said.

"That sounds good to me," Satcher replied."Although for some reason I was thinking about nacho cheese tortillachips."

With this second spacewalk under their his belt, Bresnik hasnow clocked a total of 11 hours and 50 minutes outside of a spacecraft, whileSatcher has spent 12 hours and 19 minutes spacewalking.

Today's work marks the last spacewalk of this mission andthe completion of a large chunk of the remaining objectives for Atlantis'docked mission at the station. The astronauts, led by commanderCharlie Hobaugh, are set to undock from the outpost early Wednesday andreturn to Earth on Friday.