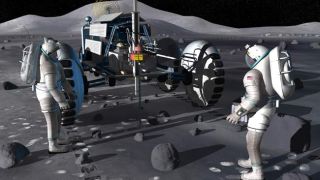 In this artist’s concept, two astronauts watch carefully as their drill bores down into the top layers of the lunar surface. Resource extraction on the Moon could sustain a human presence on that nearby world.
(Image: © NASA/John Frassanito & Associates.)

Hopes,dreams and practical plans to colonize or otherwise exploit the moon as asource of minerals or a launch pad to the cosmos got a boost today withNASA's announcement of significant water ice at the lunar south pole.

The LCROSSprobe discovered the equivalent of a dozen 2-gallon buckets of water in theform of ice, in a crater at the lunar south pole. Scientists figure there'smore where that came from.

"Thepresence of significant quantities of ice on the lunar surface catapults themoon from an interesting waypoint to a critical launching pad for humanity'sexploration of the cosmos," said Peter Diamandis, CEO and chairman of theX Prize Foundation, which is running a $30 million contest for private moonrovers. "We're entering a new era of lunar exploration ? 'Moon 2.0,' inwhich an international group of companies and governments will use the ice andother unique resources of the moon to help us expand the sphere of humaninfluence, and to help us monitor and protect the Earth."

The waterdiscovery firms up previous detections of the signatureof water molecules by three independent spacecraft. But the new findingmakes more of a splash in that the detections come from both infrared andultraviolet measurements, and a lot more of it was detected than scientists had expected.

Having thatstore of water on the moon could be a boon to possible future lunar camps. Inaddition to a source of drinking water, lunarwater ice could be broken into its constituent hydrogen and oxygen atoms,ultimately to be used in rocket fuel. That would mean spacecraft ferryingfuture colonists to the moon would not have to take fuel for the return trip,or the fuel could be used to launch trips beyond the moon. And water could beused as a shield from cosmic radiation.

"Wenow can say ... that the possibility of living off the land has just gone up anotch," said Peter Schultz, professor of geological sciences at Brown University and a co-investigator on the LCROSS mission, referring to past detectionsof water on the moon.

The newdiscovery comes just as the Obama administration is deciding whether tocontinue on with NASA's goal of putting astronauts back on the moon by 2020.Today's news could tip the scales toward another lunar leap.

"It'sgoing to boost the interest in the moon, no doubt about it," said withMichael Wargo, chief lunar scientist for Exploration Systems at NASAHeadquarters. "It's going to provide additional information that willinform the decision that will inform the future of human spaceexploration." He added that the new finding will likely be taken intoaccount when that administrative decision is made.

"Interms of the clearly most practical destination for the next two to threedecades for human exploration it has to be the moon," Burns toldSPACE.com.

In themidst of floating on "Cloud 9," as Burns described his reaction tothe water discovery, are the logistics of actually setting up a lunar colony.

"Thedevil is in the details," Wargo said, adding, "None of our spacesuitsthat we currently have would be appropriate for that extreme anenvironment."

Anymaterials built for Earth-like temperatures won't work on the moon. "Theydon't bend anymore, they fracture, and they fracture brittle-y, and so everythinggets extremely brittle at those temperatures," Wargo said.

NASAscientists have been quietly working in their tool shops on innovative ways of miningand using the goods.

The watercould also be pumped into the roof of a lunar habitat to shield astronauts fromcosmic radiation. "So think of it as a layer of insulation like you wouldhave in the roof of your house," Burns said. "Instead of thermalinsulation this is insulation from radiation from the sun."

When Apolloastronauts visited the moon 40 years ago, the picture was of a bone-dry rock.That picture has only changed within the last couple of decades as scientistsbegan to suspect that the moon's polar regions could hold stores of water icein so-called cold traps that are permanently in the darkness and can reach justtens of degrees above absolute zero, Burns said.

The LCROSS probeimpacted one such cold trap, a crater called Cabeus, on Oct. 9. The $79 millionspacecraft, preceded by its Centaur rocket stage, hit the lunar surface in aneffort to create a debris plume that could be analyzed by scientists for signsof water ice.

This wateryfind may just be the first big one with more to come. "This was a randomshot in an area of permanent darkness and there may be many more places thatcould have more of this stuff," Schultz told SPACE.com. "This is likeopening Pandora's Box."

"It'sbeen unfortunate that some have said, 'Moon, been there done that,'" Burnssaid. "We only went to the moon six times and we didn't go to the mostinteresting places on the moon. There's so much more to discover about the moonjust from a scientific perspective, what it can tell us about the formation ofthe Earth."