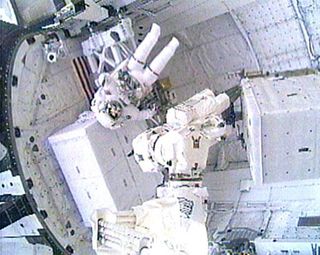 Spacewalker Nicole Stott works inside the payload bay of shuttle Discovery during a spacewalk outside the International Space Station, the first for the STS-128 mission, on Sept. 1, 2009.
(Image: © NASA TV)

Two spacewalkerscarefully removed a massive tank from its mooring outside the InternationalSpace Station late Tuesday as their crewmates unpacked a treadmill named after comedianStephen Colbert.

Thespacewalkers took special care because of the sheer size of the ammonia tank,which will be replaced with a new one on Thursday. The old tank has been at thestation since 2002 and will return home aboard Discovery for an overhaul on Earth.

The tanks aresome of the most massive pieces of gear to be handled by spacewalkers and weighabout 1,800 pounds (816 kg) when full, making them bulky - if weightless - loadsto haul in space.

The onewrangled by Stott and Olivas was nearly empty of toxic ammonia, but stillmassive at about 1,300 pounds (589 kg). It?s almost 5 feet long, 7 feet wideand 4 feet tall (1.5 m by 2.1 m by 1.2 m), so they were careful to keep itunder control until it could be grappled by the station?s robotic arm.

Olivasand Stott also retrieved a European technology experiment from the end ofthe station?s Columbus laboratory, as well as a materials exposureexperiment that folds up like a briefcase to be returned to scientists on Earth.Stubborn bolts and pins made the job a bit harder, but the astronauts - and someextra elbow grease - won out in the end.

Tuesday?sspacewalk was not without its hiccups.

About 1 1/2hours into the excursion Olivas spotted some fraying on the index finger of hisspacesuit?s right glove, but Mission Control said the defect posed no risk forthe astronaut and the spacewalk was allowed to go on.

Soon after,a sensor in Stott?s spacesuit inexplicably signaled high levels of carbondioxide in her spacesuit, but she told Mission Control she felt fine. MissionControl said the sensor appeared to be giving a false reading.

Then asevere storm over a relay station in Guam cut off communications betweenMission Control and spacewalkers, as well as the space station and shuttle, forjust over a half hour.

?You?regoing to be on your own,? Mission Control told the astronauts.

AstronautPatrick Forrester, who choreographed the spacewalk from inside Discovery, saidthey?d do what they could. The spacewalkers took photographs while waiting outEarth?s silence.

While thespacewalkers worked outside, the 11 astronauts inside the station moved the new$5million treadmill named after comedian Stephen Colbert - of the ComedyCentral?s ?Colbert Report? - into a storage spot aboard the orbiting lab.

Colbert,with the help of his fans, won the naming rights for a new space station roomduring an online NASA poll earlier this year. But NASA opted to the name theroom, which launches to the station next year, Tranquility to honor of the Apollo11 moon landing 40 years ago last month.

As aconsolation prize, NASA dubbed the station?s new treadmill the CombinedOperational Load Bearing External Resistance Treadmill, or COLBERT. It arrived at the station in more than 100 pieces and packed in several bags.

Stott, whojoined the station?s crew after arriving Sunday on Discovery, and her crewmateswill assemble the treadmill in mid-September. NASA officials said it shouldtake 20 hours to complete, so the astronauts will wait until after Discovery's departure and the arrival of an unmanned Japanese cargo ship next month to build it.

Even inpieces, the treadmill is apparently already trying to steal the limelight. Itbanged a video camera on its way into the space station.

?Looks likeCOLBERT may have dislodged the camera on his way through,? Mission Controlradioed the astronauts, one of whom quickly moved the camera back into place.

In additionto the treadmill, astronauts also moved a newastronaut bedroom and air-scrubbing equipment into the space station.

Tuesday?sspacewalk was the first for Stott. Her family watched her 6-hour, 35-minute walk inspace from Mission Control in Houston.

It was thethird career spacewalk for Olivas, who is leading the three spacewalks plannedfor Discovery?s 13-day mission. He ended the day with 20 hours and 48 minutes. The spacewalk was the 131st dedicated to space station construction or maintenance.

More unpackingis on tap for station and shuttle astronauts on Wednesday. They plan to unloada pair of sophisticated new experiment racks to study fluid physics and newmaterials in weightlessness. The next spacewalk is set for Thursday.